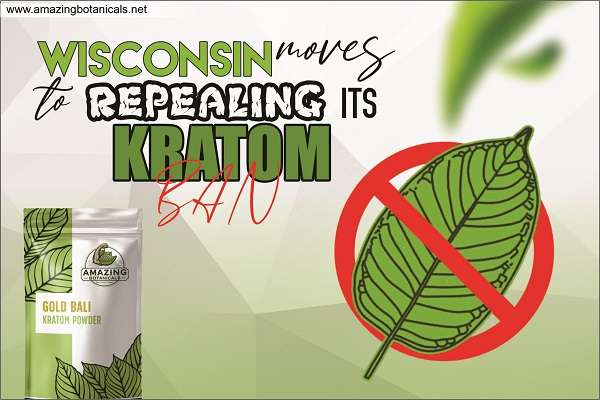 The Kratom ban is something every user is worried about. The legal status of this herb is a complex subject not only in the United States but also around the world. The federal government has been very kind to Kratom and has legalized its consumption.

However, a few states have banned this botanical in their regions and they claim that two of its major alkaloids – mitragynine and 7-hydroxy-mitragynine – are unsafe to be consumed.

In the United States, the federal laws on Kratom are exactly the opposite of Cannabis. The states are free to make their own decisions if, at any point, they disagree with the federal laws. The reason why a few states have criminalized the use of Speciosa is that they consider Kratom alkaloids unsafe for human beings. Though they don’t have any medical evidence.

This guide presents a detailed discussion on Kratom in Wisconsin, what are the laws, and how to keep this botanical alive. Let’s get deeper into the specifics.

What Is The Legal Status Of Kratom In Wisconsin?

Wisconsin is one of the six unfortunate states where a complete Kratom ban has been introduced statewide since 2013. It is, in fact, the first state to introduce this criminalization. Right after it was implemented, Kratom advocates started a battle against it because they were not willing to accept this restriction.

Currently, Speciosa is a part of Schedule-I controlled substances and it belongs to Class H. It means if a person gets caught red-handed, he or she will be exposed to a fine of around $10,000 and imprisonment of 6 years. Many lawmakers are not comfortable with these punishments and they are looking to overturn this law.

Kratom lovers started yearly campaigns to convince state authorities to rethink their decision and to somehow lift the Kratom ban. The health committee of Wisconsin arranged a hearing in 2019 to see what individuals think of Speciosa. As far as the opinion of senators is concerned, they were not in favor of banning Kratom.

In October 2021 – 2 years later – the house representatives presented a bill to lift the Kratom ban and introduce a legal way to appropriately produce and distribute Speciosa in the market. This legislation was recognized as “Wisconsin 2021 Assembly Bill 599”. Whereas, the Kratom lovers call it the Kratom Consumer Protection Act (KCPA).

An official public hearing was organized in December 2021 to discuss the future of Mitragyna in Wisconsin. The AKA representatives supported the introduction of the KCPA version of the state and discussed it in detail with the policymakers. Many advocates along with opponents attended this hearing. One month later, the House asked to vote for this bill and with 9-2 votes, it got passed. It was indeed great news for avid Korth users like you.

What Did The Legislation Present?

Though this bill was introduced to make Speciosa legal in Wisconsin, it will implement a few regulations as well. Don’t worry about these regulations as they would be customer-friendly. Let’s have a look at the major points presented in the bill.

The legislation was very strict about the parameters presented above.

What If Someone Breaks The State Laws?

If the above legislation gets passed and implemented successfully, you can’t take any of the provisions for granted. If someone violates the rules, he or she will be charged with a Class C felony. In addition, the violators will be exposed to a punishment of one month in jail or a fine of up to $500 or both at a time. Therefore, to avoid any sort of complication, it is better to be on the safe side.

This bill also focuses on the right selling standards. It says everyone who sells Speciosa will have to get a license issued by the Department of Agriculture, Trade, and Consumer Protection (DATCP). Apart from getting this license, every vendor must register its stock or products with this department. Those who don’t follow the state laws will receive penalties accordingly.

Wisconsin Kratom Bill: How Can It Be Passed?

Thinking of lifting the Kratom ban and going the extra mile to take the right steps is a remarkable strategy of the state lawmakers. Though the victory seems far, getting maximum votes from the House in favor of legalizing Kratom goods is, without a doubt, a first and a leading step to begin this journey.

The Assembly has yet to review what this bill carries in the best interest of the public. Here on this platform, the representatives are free to amend this bill before voting for it. Once it gets passed through the Assembly, it will have to follow the same process in the Senate.

If both Assembly and Senate agree on what the bill has said, the governor will receive it to put the signature. Even after it gets passed, the representatives with a two-thirds majority can reverse the decision. A veto threat always stays there.

Keep Offering Your Support & Fight For Your Kratom Rights

Despite all the threats, the Kratom advocates in  Wisconsin are hopeful for a positive decision in the end. The best approach is to benefit from the current circumstances.

The Assembly and Senate members have yet to vote on the KCPA version of Wisconsin; therefore, you have enough time to get in touch with the lawmakers and tell them the importance of voting for this bill and why it matters for the whole community.

The American Kratom Association is doing everything to support this botanical and to lift the Kratom ban from the state of Wisconsin. The official members of the AKA are continuously in touch with the state representatives and are trying to convince them to have a look at the long-term benefits of introducing KCPA.

The AKA is trying to take other states on board to improve the standards of the whole Kratom market operating in the United States. As of now, five different states have chosen to adopt KCPA and Oregon will be the sixth to accept it. According to the AKA, every state must have its KCPA version to give the Kratom industry a solid boost.

Without your efforts and support, the AKA alone can do nothing; therefore, don’t forget to offer your support as and when needed. You can also donate to support this cause as the AKA accepts donations through its official website.

Do you often see people discussing the Kratom ban and getting worried about its future? Unaware of the fact why do states restrict their communities to consume Kratom products? Want to somehow contribute to fighting against it? Don’t know how to proceed? This guide has answers to all these questions. Just go through the above discussion and you will get everything you are looking for.

What if Wisconsin accepts KCPA? Will it convince other states to do the same?

As stated earlier, 5 states have implemented KCPA in their regions so far. Oregon would possibly be the next. Similarly, if Wisconsin accepts it, there is a high chance for other states to follow the same route.

How can KCPA improve the industry standards?

It focuses on ensuring the safety of every individual buying Kratom products. It bounds sellers not to add contaminants, dangerous chemicals, additives, filler, or other similar substances to Kratom goods to make sure that everyone is getting safe, pure, fresh, and potent stuff.

What is the major reason behind everyone discussing the Kratom ban?

Well, the only reason that makes sense is the controversial nature of this herbal supplement. Only further research and more clinical trials can get Kratom out of this trouble.