Is Every Vendor Beneficial To The Kratom Industry? 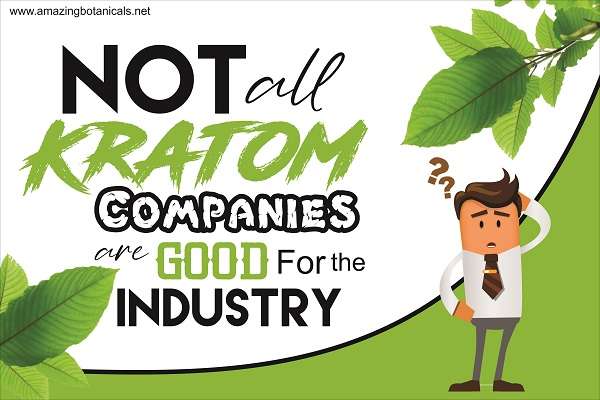 The Kratom industry, with the passage of time, is expanding day by day at a very high speed. This, of course, shows that the demand for this herb is increasing exponentially. This plant has been in this world for thousands of years but if you go a few decades back from now, Kratom was an unpopular substance, and hardly the local community – Southeast Asian residents – were aware of its existence and they have been utilizing this ancient herb for more than hundreds of years.

If you go through the stats of the last ten years, you will be shocked to see how this herbal product has amazed the whole world by grabbing the attention of millions of people and convincing them to give this plant a try, at least once. The US, at the moment, has over 15 million Korth consumers. Can you even imagine the size of the global Kratom community? It will, undoubtedly, be too large.

To build up a good reputation of Kratom, vendors and users are equally responsible. But, the thing is; do they take their responsibilities? This guide will focus closely on whether or not every seller is good for the Kratom industry. Are you on the hunt for similar stuff? Let’s get a bit deep into the discussion.

Is Every Kratom Vendor Playing Its Part Properly?

Well, this is a million-dollar question to ask from different manufacturers and especially from experienced users. The shortest possible answer to this question is, unfortunately, NO. You can ask a number of consumers about the reputation of different vendors operating in either local or global markets. You will find many users who are seriously concerned about the authenticity of the products.

Along with the increasing saturation of the Speciosa industry, the number of scams has also increased. The only reason why many sellers do scams is; they want to generate more revenues thereby selling less material. For this, instead of selling pure and fresh strains, they start mixing contaminants and other preservatives just to increase the overall weight of the product being sold.

There is a huge number of beginners who have been victims of several scams and such activities demotivate them even before using this herb. Therefore, it is very unfortunate to say that every vendor is not beneficial to the Kratom industry.

Travis McLeod is a Speciosa merchant based in Perth, Australia where Kratom is declared a controlled medication. He was involved in selling a couple of products including but not limited to Kratom. He was arrested in Bali for selling some substances (like methamphetamine) that are considered unsafe for human beings to consume.

When the local police started investigating his social media accounts, there was enough information that McLeod used to search Mitragyna in the jungles but the fact is; Kratom was not the only product he used to search for.

Two men – who were working with McLeod – were arrested when supplying him with hardly one gram of meth. As per the country’s laws, if someone gets caught while possessing meth, he may have to go to jail for about 12 years.

In addition to that, a massive Mitragyna stock was found at McLeod’s place but it was not for his personal use rather he was involved in selling through an online eCommerce store. The police seized the entire stock.

Taking a look at some vendors doing such illegal activities (like selling illicit medications), users can clearly see that not every vendor supports the Kratom industry well, rather they are a threat to this evolving industry. Aren’t they?

Is There A Way To Make Vendors Sell Authentic Kratom Products Only?

Well, no one can do it individually. It could be possible with a collaborative effort only. No matter if you are a seller or a consumer, we all should take our responsibility to make the Kratom industry stand out in the market.

There are some true Speciosa lovers who are actively contributing to spreading awareness of this marvelous herb. They are indeed the biggest advocates. On the other hand, if we talk about the official bodies performing their duties to support Kratom, you will not find a single one but the American Kratom Association (AKA). It is a US-based organization that purely works to keep Mitragyna alive for the younger generation.

AKA goes the extra mile and it not only collects donations but also spreads authentic information extracted from the experiences of regular consumers and educated manufacturers.

In addition to that, AKA is also concerned about regulating the Speciosa industry to maintain certain standards for both the sellers and the users. For this, AKA has introduced a regulatory act – Kratom Consumer Protection Act (KCPA).

KCPA bounds vendors to lab-test all of their products and use appropriate product labels to mention alkaloids concentration and every ingredient they use in the products. Vendors will not be allowed to sell products having more than 2% contents of 7-hydroxy-mitragynine. If merchants violate this act, officials can send them to jail for about 90 days and they may have to pay a fine of up to $1,000.

Important Note: If you want to purchase Kratom products, you must be at least 18 years of age because KCPA has restricted the use of Speciosa for all people who are under 18.

What Should I Consider To Find A Trusted Kratom Seller?

This has, without a doubt, become a challenging task in recent times. The reason is the same as discussed above i.e., a higher probability for a buyer to get scammed. Yes, this is very unfortunate but a fact indeed.

Are you on the hunt for a trustworthy Speciosa vendor? You need to be very careful when evaluating the credibility of a specific seller. The first thing you should do is to do some research on what precisely is going on in the Mitragyna industry like how people shop and other similar stuff.

The next step is to find out whether or not a specific merchant is GMP-certified. Sellers with this certification always sell all-natural strains because they are being continuously monitored by the relevant departments.

In addition, don’t forget to ensure that a vendor lab-tests the entire stock because it is a must to get pure Mitragyna products.

Furthermore, you can focus on the customer support services and in case they are good enough, it means the seller listens to the buyers carefully and tries to solve their queries on time. Last but not the least, you can have a deeper look at the feedback from the old buyers.

The customers’ reviews, without any doubt, are the important parameters to get the exact idea about the actual reputation of any seller around the world.

The Kratom industry has expanded its size to a great extent but in a very short time. It is amazing of course. But, there are some vendors who are just concerned about making their own profits and are misleading people. They are a serious threat to the Kratom industry and they need to be stopped. AKA is doing a stunning job in this regard.

Question: I live in a state where Kratom is illegal but the seller is saying that they’ll deliver my parcel. Should I go ahead?

Answer: Well, if a seller is claiming this, it will be a scam for sure because no one is allowed to ship Mitragyna where it is illegal.

Question: Can I buy Speciosa from discounted deals?