Is Taking Too Much Kratom Good for Health? 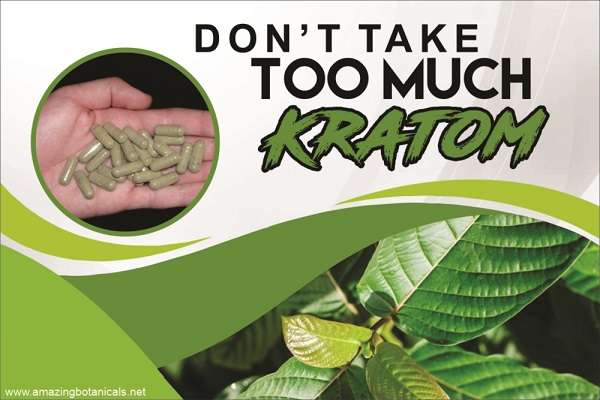 Kratom is a substance derived from the same-named tropical tree native to Southeast Asia. An overdose of the substance can result in a rapid heart rate, nausea, and, in rare situations, death. This article describes why we should not take too much kratom!

Is it possible to overdose on Ketum? People frequently ask this question, and the quick answer is yes. Recent research has discovered evidence of deadly overdoses with severe and bad side effects that can occur when someone consumes too much.

The following are some signs that you’ve consumed too much Kratom:

Low doses of Kratom have been proven to operate as a stimulant, having effects that are similar to amphetamine. Increased energy and alertness, greater sex drive, decreased appetite, and increased sociability are all stimulant-related adverse effects of taking a low dose of kratom. Low doses of kratom may have the following negative side effects:

Sedation, pain relief, euphoria, and cough suppression are all possible side effects of high doses. However, large doses might cause constipation, nausea, and itching, among other side effects. In rare situations, an overdose might result in mortality due to respiratory depression.

Many users have also reported experiencing “The Kratom Hangover”

Because it can cause coordination issues and tiredness, it’s unsafe to drive or operate machinery while taking it. Pregnant women are likewise advised not to use it for the same reason. If a person consumes a large amount of herb and falls asleep, they may vomit and choke.

There are possible safety risks whenever a substance, including herbal supplements, is not regulated by the FDA. This is because when a chemical is not regulated, there is no uniformity. This means that businesses, particularly those operating online, can sell their products in whatever way they see fit.

People may consume it without knowing what other chemicals it contains because there are no official drug warning labels for it. A buyer should know how potent a Ketum product is or whether it is pure.

The negative effects of speciosa can be amplified when combined with other drugs or prescription medications. Some of the compounds in Ketum have been known to interact with the way the liver metabolizes other medicines, potentially resulting in hazardous interactions. Many medication interactions might result in everything from seizures to liver damage.

When consumers buy commercial versions of the plant that have been combined with other drugs or chemicals, there is an additional risk. Krypton, for example, is sold to the general public as a highly strong kind of kratom. It really comprises a combination of it and a substance found in tramadol sufferers that activates receptors in the brain. Both krypton and kratom have the potential to cause respiratory collapse leading to death.

Overdosing on Kratom: Symptoms and Signs

Because of its potential for toxicity and overdose, it has been on the DEA’s list of substances of concern for some years. Because of the high number of deaths linked to its use, the US is considering classifying it as an illegal substance.

The Centers for Disease Control and Prevention (CDC) used information from the National Poison Data System to research the prevalence of Ketum usage based on the number of Kratom-related occurrences that resulted in poison control calls in a study on Mitragyna Speciosa use and overdose. Between 2010 and 2015, the number of calls to poison centers related to its use jumped from 26 in 2010 to 263 in 2015, with over 40% of the calls being serious or life-threatening.

What to Do If You Have a Kratom Overdose

Overdosing on the substance, on the other hand, is a different risk that can be quite hazardous. If you’re near someone who you think is overdosing, try to prevent them from taking any more.

Other things you can take to keep the person who has just overdosed from harming themselves include the following steps:

You can also check their pulse and breathing. If they aren’t breathing, start CPR if you’ve been trained to do so. If the person is unconscious but still breathing, roll them onto their side and bend the top leg over the bottom leg to place them in the recovery position. After that, you should tilt their head backwards.

This can be accomplished by assisting them in laying down in a safe location away from sharp objects, cushioning their head, and turning them on their side. Make sure to stay with the person who is being seized until aid arrives.

Overdosing on herbs might result in death in some situations. Other health hazards and side effects are also related to the drug.

Companies unlawfully promoting Kratom as a dietary supplement should be avoided. Marketers may exaggerate the drug’s benefits, and it could have a harmful impact on someone’s health. People who are suffering from pain, depression, or other symptoms should consult their physician. A doctor can either prescribe medication or recommend safer alternatives.