Shilajit VS Kratom: How Are They Similar & Different From Each Other? 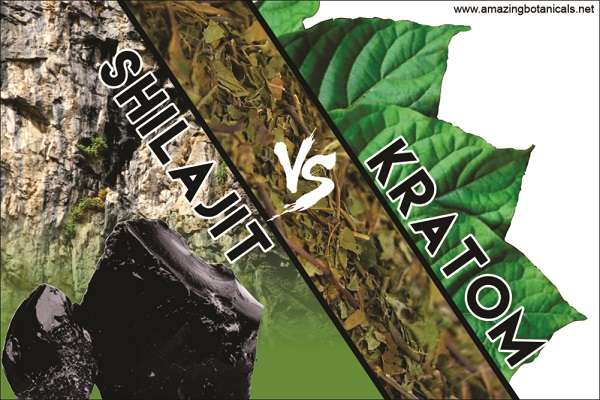 Shilajit vs Kratom is an old debate but these days, it is attracting more people than earlier. Both are extremely popular and get produced naturally. If you are looking to develop a better understanding of both of these substances, this article is for you. Let’s get going.

Before going into the details of Shilajit vs Kratom, let’s try to explore Shilajit first through different parameters as elaborated below.

What Precisely Is It?

Well, it has a long history of improving human lives and promoting natural wellness for them. It has been used in Eastern medications for many years. It is a substance highly rich in a wide range of acids and bioactive compounds. It is formed naturally in hundreds of years when plants get decomposed and pressed under heavy rocks.

The important nutrients present in Shilajit are antioxidants, potassium, zinc, iron, fulvic acid, and calcium. All these ingredients are pretty useful for you to maintain good health. This is why frequent Shilajit users usually consider this substance a safe product to eat.

The human body needs around ninety different nutrients including but not limited to amino acids, minerals, and vitamins and they can be extracted from Shilajit. Let’s have a look at where it originates from.

Where Does It Come From?

It is extracted from the Himalayan regions between Nepal and India. Apart from that, it also remains available in the Andes and Karakoram mountains. The microbial metabolites start mixing up with the compounds as soon as the organic material gets decomposed. Then, with a long fermentation process, the material goes deep into the heavy mountains.

The rocks exude this material in the form of a tar-like and dark-colored substance. People harvest this substance and collect it carefully to use in the manufacturing of different medications.

As far as the English language is concerned, Shilajit is known with three different names as listed below.

What Types This Product Is Available In?

Well, this substance is divided into different categories based on the rocks it is extracted from. Let’s have a look.

How Can You Consume Shilajit?

Well, as per the experiences of users who consume this product on a regular basis, you can take it in powder, solid, or liquid forms depending upon your interests. It carries an unpleasant taste. Therefore, experienced users have reported a couple of times that newbies can cover a very little amount of Shilajit in capsules shells to get rid of the sharp flavor.

Important Note: Shilajit does not behave with everyone in the same way; rather its influence keeps on varying from one consumer to another. Therefore, always consult your family medical doctor to get an idea of the right dose. He or she will let you know what will suit you the most.

We have covered every important aspect associated with this product that will help us draw a solid comparison between Shilajit vs Kratom. Let’s evaluate Kratom on the same scale.

The discussion on certain factors to understand the behavior of Kratom is given below. Let’s get into the specifics.

What Actually Is This?

Well, Kratom is a popular plant, herb, or natural supplement. Its major property or goal is to enhance wellness and promote wellbeing among everyone who takes it. It is basically extracted from the leaves of a popular tree commonly known as Mitragyna Speciosa in scientific terms. It has provided millions of people with an improved lifestyle and is still doing wonders for more.

It consists of more than 40 different chemical compounds that are scientifically called alkaloids. These compounds are majorly responsible for what this plant showcases. The different alkaloids present in kratom are mitragynine, 7-hydroxy-mitragynine, Speciogynine, Mitraphylline, corynantheidine, mitraciliatine, and many others. Out of these all, the first two are available in higher concentrations compared to all others. This is why they control a major portion of overall properties.

Where Does It Originate?

Kratom grows naturally in the lands of a number of Southeast Asian countries including but not limited to Thailand, Indonesia, Myanmar, Malaysia, Brunei, and other regions in the surroundings. Indonesia is the biggest cultivator of all and captures a 95% market share. The reason why Kratom grows in Southeast Asia is; the continuous tropical climate of these lands. Nowadays, manufacturers have started growing this plant using seeds in other countries like the United States as well.

The most common names include Mitragyna, Speciosa, Korth, and Mitragyna Speciosa. Some other names are Biak, Thom, Ketum, Kakuam, and Thang. But, the actual name – Kratom is more popular around the globe and thousands of people are only familiar with it.

What Types Kratom Is Available In?

Well, it is categorized on the basis of appearances and origins it comes from. As far as the appearance is concerned, it comes in white, red, green, black, and yellow colors. On the other hand, the origin-named Speciosa include Borneo, Thai, Indo, Malay, Sumatra, and the list goes on. Some of its blends are also available that do not grow naturally like Maeng Da. They are prepared by mixing two or more strains.

How To Take Kratom?

You can chew on the fresh leaves. In addition, consuming Kratom powder, extracts, tinctures, capsules,

and candies are other methods to take this magical herb. You can also make Kratom coffee, tea, and smoothies.

The regular users have reported that both Kratom and Shilajit come with an unpleasant taste. Moreover, a comparison of Shilajit vs Kratom has also shown that both substances are readily available in powder, capsules, and liquid forms.

Important Note: Usually, vendors sell fake Shilajatu powder and capsules. So, it is better to purchase this substance in a tar-like pure form from a trustworthy seller only.

Shilajit VS Kratom: What Makes Them Different?

The extraction sources are different for both. Kratom is extracted from the leaves of the Mitragyna Speciosa tree within 2 years of cultivation whereas, Shilajit takes hundreds of years to come out of bulky rocks. Similarly, Kratom grows in tropical regions whereas Shilajit is derived from wide mountain ranges.

A deeper look at Shilajit vs Kratom has highlighted the major differences and similarities between both of these products. You can gather valuable information on both from the discussion presented above.

Question: What time should I take Shilajit?

Answer: There is no fixed time for its consumption. Some people take it in the morning whereas others prefer consuming it either in the evening or at night. You can try these times to find the suitable one for you.

Question: What can I understand from the Shilajit vs Kratom comparison?

Answer: This comparison gives you a solid idea about both of these substances. If you want a switch between them, it will be very easy for you to proceed.

Question: What kind of smell does Shilajit produce?

Answer: It gives a tar-like smell that produces a pungent touch.