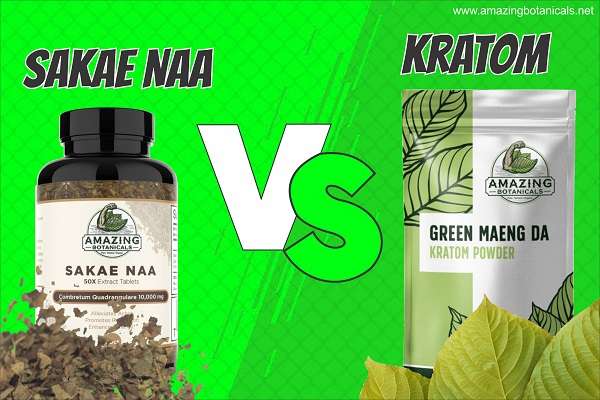 It is important to know your options when it comes to consuming herbal supplements. The two substances that we are going to be discussing today are Sakae Naa vs Kratom.

These two substances have a lot of similarities. For example, Ketum and Sakae Naa both come from Southeast Asia and they are pretty much similar in their effects, appearance, and tastes as well.

In this article, we will cover all points about the origin and effects of each supplement.  We will also discuss how much more potent one drug is compared to the other as well as some potential health risks associated with each drug. So read on!!

Kratom is a psychoactive substance derived from the Mitragyna Speciosa plant that originates in Southeast Asia. The plant has been used for centuries as both a recreational and medicinal herb.

The leaves of the Mitragyna Speciosa plant contain compounds that interact with substance receptors in the brain, producing effects similar to those of substances like morphine. The leaves can be chewed or brewed into a tea, or crushed, smoked, or ingested in kratom capsules. Speciosa is currently legal in most states of the United States.

Kratom is typically consumed for its psychoactive effects. The most common reported subjective experiences to include:

Dosage And Potency Of Mitragyna Speciosa

The potency of Mitragyna can vary depending on the strain and the amount consumed as well as factors such as weight, tolerance, and desired level of effect. The most potent kratom strains are those that have been sourced from Bali and Thailand.

The plant is typically brewed into a tea, and doses between three and five grams are considered to be high. Ten grams or more can produce intense euphoria and psychedelic effects.

What Is Sakae Naa?

Sakae Na is a recreational drug that also originates from Southeast Asia. It has been used by indigenous populations in the region for centuries for its effects like energizers and stimulants. Sakae Na has its name from the Sakai Tribe in Malaysia, which is where it was originally discovered.

The scientific name of the tree that produces this herb is Combretum quadrangulare. The Cambodian leaf tree is a small, fast-growing herbaceous plant in the Combretaceae family.

The trees grow up to 10 meters high with stems that split into fan-shaped branches and leaves which can be found on both sides of these splits along their length (like how petals work for some flowers).

It’s often planted alongside riversides or other bodies containing water – this type grows better in wet environments because the soil doesn’t hold them as well as sandy areas do!

This herb has a very potent effect that leaves you feeling extremely energized and uplifted. It also gives the user an increased level of confidence, which is why it’s used as a party substance to induce euphoria as well as being popular amongst young people for its stimulant properties among other effects.

Sakae Na is a herbal supplement that contains ephedrine and caffeine as its main ingredients. The effects of this supplement are said to be very similar to the effects of Kratom. The most common experiences include:

Potency And Dosage Of Sakae Na

Just as with Kratom, the potency and dosage of Sakae Na can vary depending on the strain and amount consumed. Effects can range from stimulation to sedation, making it a versatile choice for general relief.

The bark and leaves of this tree can be dried and crushed into a kratom powder, which is then consumed in various ways such as eaten, brewed into tea, or mixed with food. The plant can be consumed in small doses which have stimulating effects and larger amounts for sedating effects.

Can You Use Sakae Na As An Option Instead Of Kratom?

Yes, Sakae Na is often used as an alternative to Kratom because of its less potency. It also has a similar effect on the user, providing energy and euphoria. However, there are some differences between the two drugs.

Mitragyna acts on substance receptors in the brain to bring about its effects whereas Sakae Na acts on adrenergic receptors instead. This difference is what makes Sakae Na more stimulating and less sedating than its counterpart (although it still has a noticeable relaxing effect).

Sakae Na also contains ephedrine and caffeine as its main ingredients, which are known to be powerful stimulants. This can make the effects of this herb even more pronounced than those of Ketum if taken in a larger dose.

Which One Is More Potent Than The Other: Sakae Naa vs Kratom:

For people who are looking for an alternative to traditional, stronger drugs with less potent effects such as Ketum but want something that will be a little bit more subtle in comparison to the effects of this herb, Sakae Naa vs Kratom but Sakae Na is a better choice.

When we compare Sakae Naa vs Kratom, it will be fair to conclude that the latter is generally more potent than its counterpart, but Sakae Naa can still be dangerous if too much is consumed. It’s important to start with a low dosage and work your way up until you find the right amount for you.

Sakae Na can be very unpredictable, so it’s important to pay attention when dosing. It can be easy to irresponsibly take too much and end up in a situation you don’t want to be in!

Both drugs are dangerous if abused so it is important to be aware of how much to take and not to exceed the dosage.

It’s always best to speak with your doctor before trying any herbal supplements like Sakae Na or Kratom, especially if you’re taking other medications that could interact with these substances.

If you do decide to try them out for yourself it’s highly recommended that you do so in small doses first and increase gradually as you become more familiar with their effects.

When comparing Sakae Naa vs Kratom, researchers conclude that both are powerful substances that should be used with caution. Neither of them is considered safe for pregnant women or people who are breastfeeding.

They should also not be taken by anyone who is suffering from any mental health conditions like anxiety or depression.

Finally, they should not be used by anyone who has a history of substance abuse.

Where Can You Buy Sakae Na And Kratom Online?

You can buy Sakae Na and Kratom online from various websites. Just be sure to do your research before purchasing from any site to ensure you’re getting a quality product. Be sure to find a reputable source that sells authentic products and has good customer service in case you have any problems with your order.

Some reputable Mitragyna Speciosa selling brands that we trust are:

Sakae Na and Kratom can both be consumed throughout their day, but the effects of Sakae Na are more suitable for work or other activities.

Both substances provide similar benefits but they should not be used interchangeably frequently because despite their similarities, they have different mechanisms of action and therefore cause different side effects when consumed in large quantities.