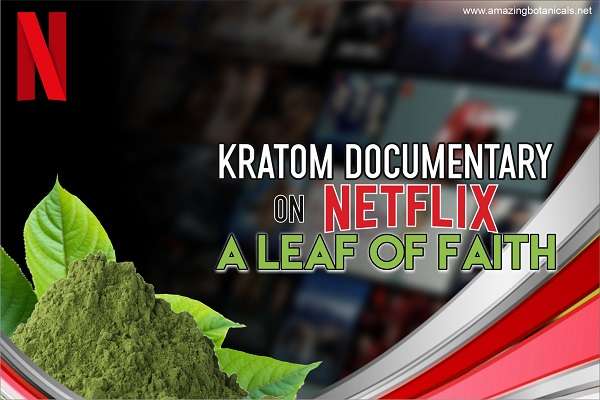 Netflix Kratom documentary – A Leaf of Faith- has revealed the reasons why you need to consume Kratom. Kratom, without any doubt, is the most loveable and well-known herbal supplement that connects a huge community of users from different areas across the world.

The reason behind its popularity is that it is available in hundreds of different versions to meet the needs of every single user. Different consumers lookout for different experiences; therefore, the diverse inventory of this herb effectively catches their attention.

When it comes to buying this plant material, you can find it in different bars, pubs, smoke shops, head shops, gas filling stations, and specialty stores. Apart from that, thousands of online Kratom vendors are also there to serve you in the best possible way.

Are you a true Kratom enthusiast? Do you explore the latest updates on this tree leaf surrounding the market? Often participate in the discussion being carried out online? You must have heard of this Netflix Kratom documentary. Didn’t you? No worries!

Want to get familiar with what precisely this documentary carries? Here is the opportunity to learn that. Let’s take a deeper look into the aspects covered in this documentary.

The FDA has made multiple attempts to somehow list Kratom among Scheduled-I medications because it considers that the important alkaloids of this plant – mitragynine and 7-hydroxy-mitragynine – are unsafe for the human begins. However, the FDA failed to present any medical evidence behind this logic.

If Kratom were added to the list of these controlled substances, it would have been considered among the products like Marijuana and LSD. Similarly, the punishments would have been very strict for the ones who break laws.

The FDA partnered with DEA in 2016 to criminalize Kratom everywhere in the United States but they were totally unaware of what is going to happen ahead. Millions of people came forward to support this plant material and they rejected the FDA and DEA’s move.

Even after a solid defeat, the FDA faced in 2016, it is still looking for other ways to somehow outlaw Mitragyna Speciosa.

At the moment, the FDA has started warning people not to purchase any product containing either Speciosa or any of its alkaloids, especially mitragynine and 7-hydroxy-mitragynine.

In short, the FDA wants no one to consume Kratom until the research studies declare this herb a safe substance for human consumption.

The major concern highlighted in this Netflix Kratom documentary is the misleading information spread around the community including the negative media coverage. Similarly, a couple of deaths have also been associated with this magical tree leaf. However, there is no medical proof supporting this claim.

The point that the US government has neither banned nor regulated the Kratom industry is also highlighted in this documentary. The biggest barriers that make it very challenging to counter the wrong statements revolving around are the research studies and clinical trials at the same time.

This picture has presented a Florida-based controversy where a law got passed stating that Kratom is an unsafe herb and has the potential to create complications for the consumers. The thing is, no evidence supports these allegations and no solid counter-arguments to negate them. Only research studies and clinical trials can fill this huge gap.

Just by having a look at limited to no research, the FDA is taking actions to make Mitragyna illegal with more confidence. A couple of suggestions are indirectly presented in the documentary to regulate the whole industry because it is the only way to ensure that everything is going safely and smoothly throughout the Kratom market.

Once the whole industry gets regulated, it will be equally good for both sellers and buyers. The chances for a customer to be a victim of scams will be reduced to zero. Hence, the regulation will surely be a good step towards the betterment of the Speciosa community.

One thing that helps this documentary attract the attention of viewers is that it presents in-depth information on Mitragyna and the influence it offers.

Even if you are new to the Mitragyna industry and have zero knowledge about it, you will get a complete understanding of this plant material right after watching this Netflix Kratom documentary.

The way information is presented is super amazing, educational, and easily understandable. Things like where Speciosa comes from, how it is prepared, and how alkaloids control its potency are also discussed in detail.

Several Kratom products including but not limited to teas, tinctures, extracts, powders, and capsules are considered as well to make newbies aware of them all. More precisely, it is a complete package that covers the basics of Korth in detail.

In addition, this Netflix Kratom documentary shares some unique aspects of this herb that many of us are unaware of. If you haven’t yet watched it, go ahead and learn. You are surely going to love it if you have any plan to start your Mitragyna journey somewhere in the future.

How Can You Make The Future Of Kratom Bright?

A great thing that many people loved about this Netflix Kratom documentary is that it has a soft corner for Speciosa and its future. To make the future of Korth bright, this movie convinces people to become its advocates and play their part to spread real awareness.

It engages true enthusiasts to endorse the industry’s regulation as well as to highlight the need for research studies to get some credible conclusions.

The producer has also introduced the role of the American Kratom Association to the movie. A strong message for those who want to support this plant is to get in touch with the AKA to stay up-to-date on the latest Mitragyna updates.

The AKA is a champion organization officially supporting Korth products and working on keeping this herb legal in the long run. To make the process of manufacturing and selling Mitragyna goods safe, AKA has introduced a popular program namely the Good Manufacturing Practices (GMP).

In addition, the documentary also considers the introduction of the Kratom Consumer Protection Act (KCPA). The AKA has specifically introduced this bill to regulate the local Korth industry. If you want to become a Speciosa advocate or a protector, you can sign up for the KCPA program. While signing up, don’t forget to read through the complete details of this program.

Keynote: A couple of vendors operating in both the local and online market are found selling outdated and impure strains. So, never forget to ensure the good quality, highly potent, fresh, and lab-tested products while making your purchases.

Are you wondering what this Netflix Kratom documentary carries and why was it made? Do you want to get deeper into the details covered in this picture? This is the article you are looking for. It has covered everything you want to explore regarding the Mitragyna controversy, bans, and the future. It will take not more than 5 minutes for you to read through the above discussion.

Question: What was the basic aim behind making this Netflix Kratom documentary?

Answer: The major goal was to spread true awareness of this magical herb by telling them the bad incidents that happened to Speciosa in the past. It has also focused on why the world needs to consume this tree leaf.

Question: Is it worth it for a Kratom lover to watch this documentary?

Answer: Yes, it is. It triggers your emotions and efficiently convinces you to offer your support to protect this herb. Even if you know nothing about Kratom, this documentary can be a life-changing tool for you.

Question: When was this Netflix Kratom documentary – A Leaf of Faith – released?

Answer: Well, this special documentary was released in the United States on May 29, 2018. It was produced by a popular filmmaking company – Oxymoron Films.