Natural Nootropic: Is Kratom A Nootropic? 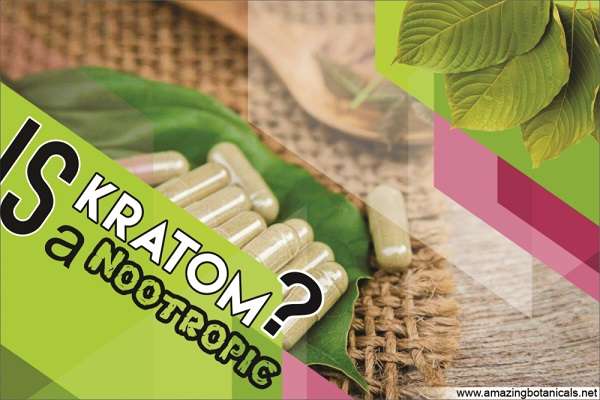 Natural nootropics are a big topic these days, as people seek out whatever advantage they can in this age of information and media overload. Plant-based nootropics, in particular, are gaining popularity as people seek natural options that are both safer and gentler on the body. Is kratom a nootropic? This is one of the most often asked questions. To grasp the answer, it’s helpful to consider what people mean when they talk about nootropics and how Kratom fits into that category.

Nootropics are a broad category of supplements, medicines, and other substances that are thought to improve brain performance or have been demonstrated to do so. This means that if you take it, you might get benefits like better focus, more creativity or inspiration, and better memory. You may already be familiar with some nootropics, such as caffeine, creatine, and Ginkgo Biloba, to mention a few. These compounds are thought to produce the following benefits when taken alone or in combination with other similar substances.

Of course, biohackers who are already familiar with the nootropic sector could recognize some of the more well-known man-made nootropics, such as Adrafinil, Piracetam, and Noopept. Simply put, many people will choose to include nootropics in their daily wellness routine in order to improve their professional or physical performance.

Because the term “nootropic” can imply different things to different individuals, it’s crucial to grasp these drugs in a broader sense rather than focusing solely on the outcomes that others expect from them. Natural nootropics, for example, may not receive as much attention from the nootropic community as chemical nootropics because they do not provide the same results. Kratom must be classified objectively rather than subjectively.

It’s worth noting that many of the nootropics on the market are currently uncontrolled. When choosing a nootropic, users should exercise caution and conduct a study to ensure that the ingredients are both safe and scientifically backed. Unfortunately, numerous nootropics firms are mislabeling their products or employing unapproved medications. Always buy from trusted merchants when purchasing items for your health and fitness.

What are “Natural Nootropics” ? Is There a Difference Between Them and Other Nootropic Supplements?

Nootropics are a vast category of health supplements. Some are made from pure plant material or are natural herbal extracts. “Natural nootropics” are plant-based nootropics that haven’t been altered in any way.

Many of the most well-known nootropic pills, on the other hand, are synthetic medications, meaning they are generated by processing and mixing man-made compounds or chemically changing natural ones.

Natural nootropic pills are preferred by the health and wellness community over manufactured nootropic supplements. Natural nootropics typically have a long history of use and research, which is a better indicator of efficacy and safety. Synthetic nootropics, on the other hand, are more recent, unproven, and have less evidence to back up their safety and effectiveness.

Is Kratom a Nootropic?

We must analyze what effects ketum has traditionally been used for in order to establish whether it falls in the category of natural nootropics. Because of its legal status, there have been few large-scale kratom tests or research studies on its effects. While the present research shows promise, there isn’t enough scientific information to declare for sure. Instead, we’ll focus on the function it performed in its native region — and continues to play in villages remote from urban medical services.

Low doses of ketum have been utilized as a natural nootropic by local tribes for millennia because of its energizing properties and capacity to aid enhance work output. This quality is what encouraged some American soldiers to choose kratom as a way to help them stay awake and aware when standing watch in the jungle for long periods of time.

Higher aromatic kratom doses, on the other hand, are said to have the opposite effect, relaxing and calming the user so they can focus on work without being distracted by anxiety. There is no scientifically certified method or recommended use for best results, as there is with many plant-based nootropics.

Is it True that Kratom has Nootropic Properties?

Because of the psychotropic properties of Kratom, a wide range of people find it useful, and its natural element adds to the appeal of consumption, despite the fact that it isn’t legal. Kratom’s popularity among herbal medicines is growing, whether users require it to improve clarity and memory or to help them sleep at night.

Mitragynine, one of Kratom’s primary alkaloids, acts as a partial agonist of the brain’s  receptors (MOR). This is why Kratom has effects that are remarkably comparable to those of other nootropics, with consumers reporting:

When it comes to mitragyna speciosa, the dosage has a big influence on how the experience goes. It acts as a stimulant when taken in tiny amounts, increasing the users’ attentiveness and vigor. It can cause drowsiness, relaxation, and euphoria in high dosages.

Is it legal to take nootropics?

Yes, the majority of natural nootropics are legal in the United States. Many nootropic pills, in fact, are widely available as over-the-counter medicines that do not require a prescription.

Many other nootropics, particularly synthetic nootropics, are, on the other hand, heavily regulated or even forbidden. Obtaining a prescription for nootropic medicines may be difficult or impossible depending on the jurisdiction.

There you have it: Natural nootropic: Is kratom a nootropic? As you can see, this amazing plant offers a slew of advantages, including physical, cerebral, and nootropic advantages. Some people have begun utilizing ketum as a nootropic in recent years. Most users report that it provides a stimulating impact at lesser doses. Lower doses frequently enhance energy, motivation, and focus, reduce anxiety, and improve mood. Higher doses are usually better for pain management.

Ketum has been used as a nootropic in Southeast Asia for generations. Farmers chewed on the leaves to boost production and reduce weariness.

Fast forward to now, and speciosa is being taken all over the world to boost productivity and motivation, as well as alleviate anxiety and exhaustion and improve mood. It’s generally thought to be highly safe, and it’s an excellent addition to any nootropics collection.