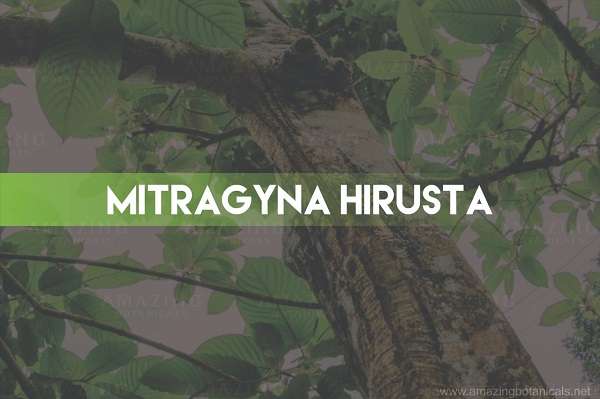 Many individuals are looking for alternatives to Kratom now that it is becoming more popular. It is because Kratom is not legal in many parts of the country. Since it isn’t available everywhere, people are turning their heads towards Mitragyna Hirsuta. But is this herb a suitable alternative for Kratom? Let’s debate! Mitragyna Hirsuta underwent utilization in Asian culture for many centuries and might be usable instead of Kratom. But before jumping to conclusions, we need to take a closer look at this botanical and its properties.

What is Mitragyna Hirsuta?

Mitragyna Hirsuta is a kratom-like natural supplement. Both are members of the same ethnobotanical family, which also happens to include coffee. If someone feels like Kratom isn’t their cup of tea, they might agree that the herb is a reasonable alternative. However, finding beneficial information on this substance and its alkaloid, mitraphylline, might be challenging.

Where did Mitragyna Hirsuta Originate?

Kratom, technically known as Mitragyna Speciosa, comes from Southeast Asia, as you may know. Plants belonging to the same ethnobotanical family are likely to have their origins from comparable climates. Mitragyna Hirsuta is a species of Mitragyna that you may discover in the rainforests of Cambodia, Malaysia, Thailand, and Vietnam. Since Kratom products are unlawful in Thailand, people have to rely on other available botanicals. As a result, it is incredibly well-known over there. Many people from the local regions refer to Mitragyna Hirsuta powder and other products by the name “krathumkhok.” The Mitragyna Hirsuta tree’s leaves are slender, light green, and have noticeable veins extending through them.

The Effects of Mitragyna Hirsuta

Mitragyna Hirsuta, like any other possible Kratom substitute, might have some of the same effects upon consumption. Many anecdotal consumer reports frequently claim that Mitragyna Hirsuta has lesser effects than Kratom powder. However, these claims have no backing whatsoever from actual scientific research. Nevertheless, the users of this herb have reported the following:

However, the herb does have its fair share of drawbacks. Drowsiness, dizziness, and lethargy are the most frequently mentioned adverse effects after consuming this herb. Other than that, some people have also experienced periodic episodes of nausea.

Mitragyna Hirsuta contains many alkaloids, which are the active elements that give the botanical its properties. This plant includes mitraphylline, an alkaloid that binds to the same mu-opioid receptors in the brain as mitragynine. It is also present in Kratom (Mitragyna Speciosa) and Cat’s claw (Uncariatomentosa). Other than that, an oxindole alkaloid called Isomitraphyllinol also had its traces in the herb. However, the properties of this active ingredient are unknown at this time and require additional research. Nevertheless, is there an estimate of Mitragyna Hirsuta’s therapeutic potential? This supplement has potential links to a rise in metabolism and stress reduction, alongside excitation and moderate pain management. However, no evidence to back up these claims is readily accessible. But research on the effects of the alkaloid mitraphylline, when isolated from the Cat’s claw plant, is obtainable. In this regard, people believe that the alkaloid has long had anti-inflammatory properties. For now, Kratom’smitraphylline is under research for usage, and we may expect Mitragyna Hirsuta to be a future contender for analysis as well.

Comparison of Mitragyna Hirsuta and Kratom

Mitragyna Hirsuta is said to be comparable to the red vein strains of Kratom. This botanical has some of the same characteristics, but it also has noticeable differences. It has a higher level of effectiveness than other Kratom substitutes, although it does not appear to achieve the same potency as red Kratom strains. When compared to others, the alkaloid concentration of Mitragyna Speciosa is relatively high. Kratom is well-known for its substantial concentrations of mitragynine. These alkaloids are known to interact with brain receptors. On the contrary, the herb does not contain either mitragynine or 7-hydroxy mitragynine. The alkaloid mitraphylline is abundant in Mitragyna Hirsuta. The characteristics of this alkaloid will be comparable to those of Kratom. Similar to Kratom, there is little research evidence on this substance, so you’ll have to rely on personal experience while examining it. The most significant distinction between Kratom and Mitragyna Hirsuta is their alkaloid content. But people who have tried both say that Hisuta is less psychoactive than Kratom. Due to this, many individuals favor this plant. Kratom, on the other hand, is known for its long-lasting effects. In the end, it all depends on what you want to get out of these botanicals.

The legality of Mitragyna Hirsuta in the US

This prospective Kratom substitute is legal in all 50 states. As most of you might already know, some states and towns have bans on Kratom products. On the other hand, is generally thought to be safe to use. Consequently, buying, possessing, consuming, and selling this botanical is legal in the United States. Despite its admissibility, the Food and Drug Administration (FDA), the Drug Enforcement Administration (DEA), or any other government agency doesn’t manage Mitragyna Hirsuta supplements. Therefore, its products are generally labeled for “external use only” because of this.

In their native lands, local laborers chewed the leaves of this herb to maintain their stamina throughout the day. But out of its traditional usage, the botanical is commercially available as a dried powder. You can use this supplement exactly like Kratom powder. It may include the following methods:

Where to buy Mitragyna Hirsuta?

Since it’s globally legal, you can get your hands on this herb anywhere in the US. However, you will still have a much better chance of finding it online than in local supplement stores. You may check out this herb at Amazing Botanicals (amazingbotanicals.net), as it is available for unbelievable prices.

All in all, it’s safe to say that Mitragyna Hirsuta is a good enough alternative to Kratom products. So if you’re in the market looking for new botanicals, be sure to check this one out!