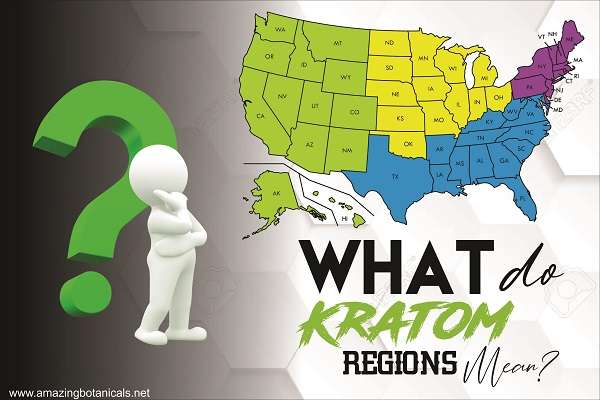 Kratom regions play a key role when it comes to identifying a specific strain out of many. Speciosa comes in several different forms making it difficult for many buyers, especially for first-timers to purchase the right item. It was indeed a huge challenge that convinced all the growers, manufacturers, and sellers to look for a credible way out.

Keeping in view the buyers’ concerns, the sellers decided to categorize Kratom into two major categories. One of them is physical appearance whereas the other one is the origin.

When it comes to color coding, this herb comes in three major varieties i.e., green, white, and red. You can also find some yellow and black strains but they are not that popular.

Similarly, based on the origins, Mitragyna is divided into several different types and we will see the details later in this guide. If you are looking to have a healthy discussion on Kratom regions, you are reading through the right material. Let’s get a bit deeper.

Where Does Kratom Grow?

Well, Mitragyna is indigenous to Southeast Asia that consists of a wide range of countries. Every country or region has its own specialty and different people love taking strains coming from different lands.

The parameters that make different origins unique are the concentration of important alkaloids, weather conditions, and cultivation approach. The variation in alkaloid concentration leads to varying potency levels of different Mitragyna variants.

The Southeast Asian land is perfect for the amazing growth of Kratom trees. The hot environmental conditions and a specific amount of humidity help this plant preserve all-important properties that contribute to making the overall experience enjoyable once you consume it.

How Is Kratom Prepared?

From harvesting to showcasing on the stores for selling, the whole process consists of 6 different stages as listed below. Almost all Kratom regions use the same process to prepare fine Mitragyna.

1. Waiting For Trees To Get Matured

Once the trees start growing, growers wait for the leaves to mature. But, not all kratom strains are extracted from the fully matured leaves like white veins are obtained at the early stage of maturity.

Once the leaves get matured, farmers carefully start collecting the leaves and washing them properly. They make sure that there is no dust or any other substance on the leaves.

Right after handpicking the leaves, growers dry them for a few hours to make them crispy. Many farmers use sunlight for the leaves to get dried whereas some of them prefer indoor drying.

The industrial grinders are mostly utilized to grind dried leaves to convert them into a finely grounded version of Speciosa.

Once the farmer gets smooth and consistent kratom powder, they send it to the packaging facility to pack it into airtight containers or sealed packets.

Last but not least, displaying is the last stage of the whole process. Different stores (online or offline) use their platforms to display carefully packed items.

Now, let’s have a look at the different Kratom regions that produce premium-quality of this tree leaf.

Some of the most popular regions producing huge Mitragyna crops are discussed below.

It is one of the most reputed countries of Southeast Asia that is known for providing ideal conditions for Kratom to grow naturally. In addition, you will be amazed to know about the fact that Indonesia produces the biggest Mitragyna crop and it has captured 95% of the total market production around the world.

A couple of debates are being carried out about the criminalization of Korth in Indonesia and it was expected to get banned by 2022. The deadline has further increased by 2024 but we can not say anything in this regard, at least for now.

A limited research study has stated that the Speciosa obtained from Thailand carries a special kind of strength that attracts the attention of many users from across the world. The country has not provided the community with a particular law on Speciosa.

Kratom was first banned here in 1943. In addition, this herb was added to the family of Schedule 5 medications in 1979. Later on, just 3 years back in 2018, the medical use of this herb became legal within the premises of Thailand.

It is divided into 3 different countries including Brunei, Malaysia, and Indonesia. It is the world’s 3rd largest island. Both Brunei and Malaysia have outlawed Mitragyna within their regions; therefore, every Borneo strain comes only from the Indonesian part of Borneo island and this part is famous as Kalimantan.

It is a famous place to attract overseas tourists with its natural beauty. Many people are unaware of the fact that this land also produces a good quality version of Korth. This island also falls within Indonesia making this tree leaf legal to consume for everyone but no one appreciates overdosing on it.

It is situated in the western part of Indonesia. Sumatra is famous for its unbelievable commercial Korth farms. Along with producing a huge amount of Kratom, it also provides the whole world with another famous plant – coffee. In Indonesia, Sumatra produces the largest coffee crops.

Both Kratom and coffee are the source of generating huge profits for the island and country of course.

All the products coming from this Kratom region are associated with a particular name – Malay. Some studies have claimed that the concentration of 7-hydroxy-mitragynine and mitragynine (the two most prominent alkaloids present in Mitragyna leaves) is comparatively less in Malaysian strains. To develop any claim from this statement, further scientific research is required.

The cultivation and marketing of Kratom are not allowed in Malaysia. It clearly shows that you can not export Kratom from this region.

Yes, this is true. Every Kratom region has its own specialty in terms of atmospheric conditions and alkaloid concentration. Therefore, you should expect different influences from the strains coming from different regions.

For instance, the properties available in the Bali Speciosa are not exactly similar to Borneo Mitragyna. On the other hand, Malay, Thai, Indo, Sumatra, all carry different alkaloid concentrations and produce different levels of potency.

Some regions may provide you with more potent strains whereas you may get less potent Mitragyna variants from other regions.

Kratom regions are the places that provide you with all-natural and premium versions of Mitragyna Speciosa. Every region is unique in terms of its climate and nature of cultivating lands. This is why we feel different influences while using different Kratom variants. The most popular Kratom regions include Indonesia, Thailand, Malaysia, Myanmar, Bali, Borneo, and others.

Question: Which is considered the most potent and powerful Speciosa strain?

Answer: Well, you will find many articles and users saying that the Maeng Da is the most potent version of Mitragyna Speciosa. It has the capability of giving you an instant influence. If you are a regular consumer and prefer strong influence, you are going to become a huge fan of this particular tree leaf.

Question: Why have some regions outlawed Speciosa though they are a huge producer?

Answer: The regions that have criminalized the use of Mitragyna within their premises, consider this tree leaf as a risk for human health. This is why they suggest their community stay away from this plant.

Question: Should I look for the Korth region when buying a specific strain?

Answer: Yes, of course. Ensuring the right origin of any strain can help you buy the right product. You should never take this parameter for granted to get rid of usual scams.