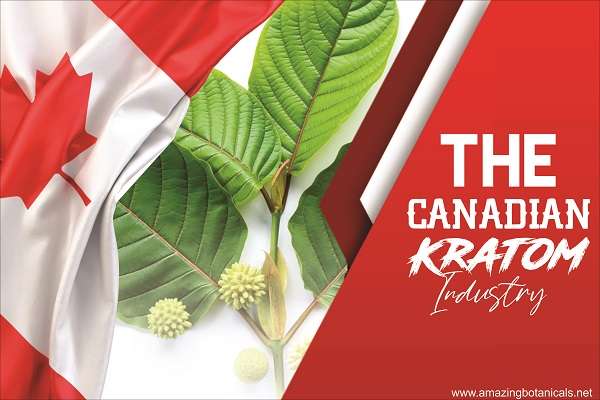 The Kratom industry in Canada is not only a concern for local residents but it is grabbing the attention of millions of Speciosa enthusiasts belonging to different global regions. Canada falls within the boundaries of North America; therefore, both the American and Canadian governing bodies work in a pretty similar way.

Are you a local citizen or planning to move to this country somewhere in the near future? Do you love consuming Mitragyna frequently? You must be familiar with the latest standards being followed in the Kratom industry in Canada. To get all such stuff, keep on reading this guide.

Is It Possible To Consume Kratom In Canada?

Nowadays, a debate on the Kratom industry in Canada is becoming too popular especially concerning the legal status of this plant. While going through different studies and state laws, you will not find any limitations imposed by the federal authorities. It is a clear signal for the Mitragyna enthusiasts that Speciosa is not banned in Canada.

Moreover, Kratom in Canada is not added to the list of illicit medications and users appreciate the official authorities for not banning it. But, on the other hand, there are brighter chances for the country to amend its laws on this tree leaf.

Important Note: Whenever you plan to take Speciosa within the premises of this country, you should be well aware of the latest laws and regulations. It will be pretty useful for you to keep things going smoothly.

Canada, just like the United States, has two governing agencies that are given the responsibility to closely monitor food and health-related activities going on in the country. The FDA and Health and Human Services (HHS) are US-based official departments that are responsible for taking care of the health and wellness industry.

Whereas, Canadian Food Inspection Agency and Health Canada are operating in Canada to perform similar duties. Let’s have a look at the functionalities of both these departments separately.

The major goal of CFIA is to regulate the health and wellness industry based on scientific evidence. It focuses closely to improve the health and wellbeing of Canadian residents. For this, CFIA protects every animal, plant, or food item carefully. This also has a direct impact on the Canadian environment and economy. The major activities associated with CFIA are listed below.

HC is a federal body that is known for setting certain standards to regulate the nutritive value of every food item being sold within the premises of Canada. Every vendor is strictly bound to follow these standards to keep their businesses alive in the country.

In simple words, HC helps Canadian people improve and maintain their living standards thereby improving their health. For this, HC goes the extra mile to develop policies, regulatory standards, and useful safety guidelines to protect the nutritional profile of all herbal goods.

Is The Kratom Industry In Canada Regulated?

Well, all American and Canadian governing bodies – FDA, HHS, CFIA, and HC – have the same opinion regarding Kratom. None of these departments accepts the concluding remarks of a couple of scientific research studies saying that Kratom when taken in appropriate doses, is not an unsafe product for human beings.

Ignoring some research studies, HC claims that consuming Mitragyna can cause serious health-related complications for anyone who uses this herb. In addition, this department has listed some secondary effects. However, experienced users, manufacturers, and some studies negate all these claims of HC.

As per the government of Canada, HC has not authorized any product for sale that carries Kratom as one of its ingredients.

Therefore, no one is allowed to sell such products unless and until they are not authorized. In addition, HC doesn’t appreciate people taking this ancient herb because it considers Speciosa as a dangerous herbal product.

Can I Buy Kratom In Canada?

A long time ago, the Narcotic Control Act (NCA) was serving the country in taking care of food and herbal products. But, later on, with some amendments in the laws, a new act was introduced in 1996. According to this act, any product listed in the act became illegal.

As far as Kratom is concerned, this plant is not listed in controlled substances. Therefore, from a technical point of view, it is legal for you to buy kratom in the country. But, without any doubt, there are many complications associated with the Kratom industry in Canada.

The country doesn’t allow vendors to sell Mitragyna items as health-related goods making it difficult for the sellers to spread awareness about their businesses. In simple words, you can say that merchants aren’t allowed to sell this herb for internal uses so they must be careful when marketing their goods.

If you explore different online stores, you will clearly see a warning saying “Kratom is not available for human consumption”. Some vendors are selling this tree leaf for research purposes whereas some are utilizing their items to prepare cleaning agents.

The legal status of Speciosa is not clear in the country and at the same time, it is not possible for an individual or a department to assess the exact risks associated with this industry. As of now, HC on its own has taken some steps and seized many unauthorized stocks being sold on different locations within the country.

After seizing a couple of stocks, HC issued some safety alerts to protect the public making it more difficult for both the sellers and the buyers to sell and purchase Kratom products respectively. In such a scenario, it is better to search for another source that can provide you with quality stuff with minimum risks.

If you are thinking of purchasing Speciosa directly from Indonesia, it could be a risky step too because agencies working on the borders remain in touch with HC and CFIA.

Apart from that, there are some other countries including but not limited to the United States where you can ensure safe Mitragyna purchases. The US consists of a huge community of trusted online Speciosa sellers that offer all-natural products at unbeatable prices with minimum to no risks.

The Kratom industry in Canada is expected to introduce more limitations on the use of this plant in the new future. But, nothing said, for now, is final. As of now, you can purchase and take Kratom in the country but sellers should authorize their products. HC, in the past, has seized a couple of facilities that were involved in selling unauthorized Mitragyna products.

Question: Is the future of Kratom bright in the country?

Answer: Well, for now, nothing could be said in this regard. It seems dependent on the research and medical trials. If in the future, research becomes successful to prove that Mitragyna is a safe substance, it may become legal. Otherwise, the country may completely ban its human consumption.

Question: What could be the possible step to maintain good standards for the Kratom industry in Canada?

Answer: The vendors should start following Good Manufacturing Practices (GMP) standards to provide buyers with supreme quality products. It could be a great contribution from the sellers to the Speciosa industry.

Answer: Yes, of course. Reputed sellers always focus on lab-testing every single of their strains. Lab-testing ensures that a product is free from heavy metals, preservatives, and other contaminants. So, don’t forget to check lab tests when purchasing.