Things To Know About The Legal Status Of Kratom In Wisconsin 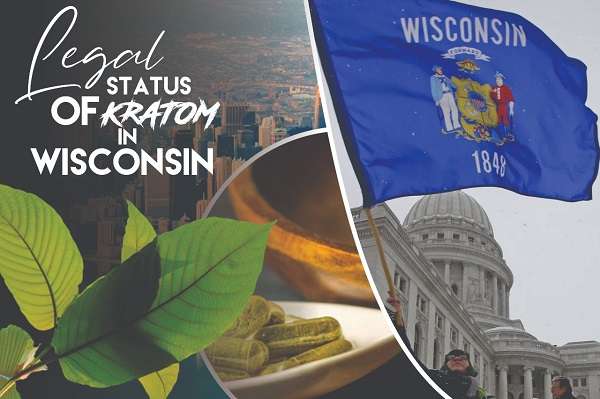 Kratom in Wisconsin is currently the most contentious topic of today’s discussion in the United States. There seems to be a single reason behind this fact and that is the controversial properties of Mitragyna Speciosa. Another factor is the negative coverage or fake stories painted by the media in many regions of the globe. All such activities lead to banning this plant in various parts of the US as well as around the globe.

As far as the state of Wisconsin is concerned, it is the center of Scandinavian American and German American culture. The state is often called the dairy land of America because it produces a huge amount of dairy products. The most famous dairy item being produced by this state is cheese.

Furthermore, Wisconsin is known for its natural beauty displayed by wonderful lakes, botanical parks, hilly areas for hiking, and many other similar places. The natural beauty, as well as the attention-grabbing lifestyle of this state, convinces overseas tourists to plan a trip over there.

Botanical lovers visiting this state usually ask about the legal state of kratom in Wisconsin. Well, this is an important topic to have a detailed discussion on. Are you the one looking for similar information? Congratulations, you are exploring the right platform. Just keep on reading to get what you are actually looking for.

Background Of Kratom In Wisconsin

A senate bill – 325 was proposed in 2013 with an intention of adding major Mitragyna alkaloids (mitragynine and 7-hydroxy-mitragynine) to the list of Schedule-I controlled substances.

It took around 7 months but the bill was accepted by the senate, the assembly, and the governor. As a result, the sale and consumption of this tree leaf were made prohibited. Until now, it has been almost 8 years and still, those alkaloids are banned in this region and no information is released about the future of this plant.

Can I Legal Consume Kratom In Wisconsin?

Wisconsin is one of the unlucky 6 states of the US that has completely banned this herb for human consumption. As mentioned earlier, the basic idea was to somehow criminalize the main alkaloids of Speciosa because the FDA considered them as unsafe plant ingredients.

There are a few discussions and chances for this plant to get decriminalized but to say anything, for now, would be too early. If you talk about today, the state is very clear in its opinion and that is not to use and sell Mitragyna within the premises of Wisconsin.

Note: The laws are very strict and every city obeys them carefully. If someone gets caught red-handed either selling or possessing Mitragyna Speciosa, he or she may have to pay a heavy fine (up to $10,000) or jail for up to 3 and a half years. The state has the right to impose both punishments simultaneously.

The Role Of AKA In Supporting Kratom In Wisconsin

The American Kratom Association (AKA) is a magnificent Korth supporter that has done many wonders in the US and is still trying its best to do more and more. In 2019, some of the AKA representatives had a meeting with the Wisconsin senate.

AKA presented the suggestion of introducing the Kratom Consumer Protection Act (KCPA) to maintain world-class kratom standards. They claimed that KCPA will ensure that everyone is getting products that are free from impurities and other added substances.

As of now, AKA is trying its level best to implement KCPA standards in this state but it has not yet succeeded in this regard. If you love taking Mitragyna Speciosa, all you need to do is to keep on playing your part to keep this ancient herb alive in your region.

Where Should I Buy Kratom In Wisconsin?

Now, you are familiar with the legal status of kratom in Wisconsin. You would possibly be thinking about whether or not you can purchase this tree leaf using any secret way. Well, there is no secret method of purchasing Mitragyna Speciosa products if you are living in this state of the US.

If you go out, you will not find even a single local vendor selling such items because they know very well that the state has imposed a heavy fine and jail if they do not obey the laws. So, don’t try to use any illegal way of buying Speciosa in this region or carrying this herb with you while traveling to this state. It could put you in a lot of trouble to deal with.

What Is The Future Of Speciosa In This State?

With a solid campaign launched by the AKA in the senate, it seems that the state will unban Korth and will regulate it somewhere in the future. But, no one can predict how long it will take to happen. If this plant gets regulated in Wisconsin, the Mitragyna industry will have to follow the KCPA standards. It will indeed be good news for AKA as well as for other supporters.

Ending Note On Kratom In Wisconsin

The legislative authorities do not allow you to ingest kratom in Wisconsin because they think it is not a safe herb for human beings to consume. As long as you are within this state, you can not even think of using or buying this plant. If you do any such activity, you may have to pay heavy fines and you could be sent to jail for a couple of years. Therefore, avoid doing any illegal activity so that you can live in peace over there.

Question: What was the reason behind criminalizing Speciosa in this state?

Answer: A famous body of the United States – DEA had considered kratom to be banned and claimed that two of its alkaloids are harmful to human health. This was the primary reason that made state authorities take such actions.

Question: Can Mitragyna advocates do something to make this plant legal?

Answer: Well, these advocates have literally done wonders around the globe. With some solid campaigns and amazing strategies to spread Korth awareness among the community, the supporters of this herb have convinced many legislative authorities to decriminalize this plant. They can do the same in Wisconsin.

Question: Can I place my order online to purchase Korth products?

Answer: Online sellers always look for the legal status of this plant in the places where they have to ship the order. Since Wisconsin does not allow anyone to sell or purchase such products in its region so no vendor will process your order and ship your parcel.