Kratom In The US: How Are Users Associated With This Herb? 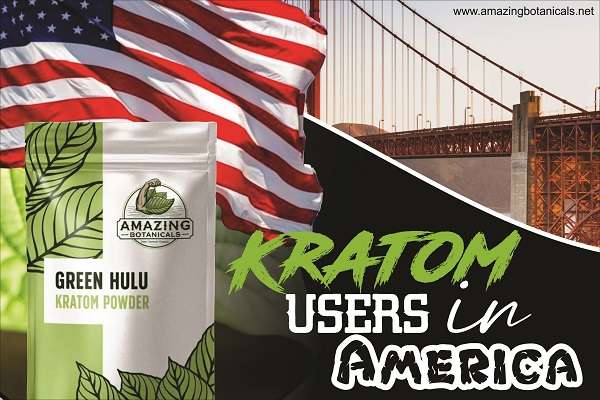 The use of Kratom in the US is beneficial for different native countries because it adds extra value to their economies. Kratom is a Southeast Asian herb known scientifically as Mitragyna Speciosa. It grows well in humid and hot environments because such weather conditions help the plant preserve all-important properties.

It is a fact that Mitragyna has been in this world for thousands of years but most of us were unfamiliar with its existence because it was not accessible for everyone.

In addition, this plant was not so popular even in the regions where it grows. But, later on, the native societies started benefiting from this tree leaf and they were found involved in using it for various medicinal purposes.

With decent technological advancements and ease of transportation system, Kratom targeted other parts of the world including but not limited to the United Kingdom, United States, Canada, and Australia. Every country has its own Korth community but the US has the biggest of all.

A lot of individuals along with an organization (AKA) are working to support this herb. This article will make you familiar with how users are associated with Kratom in the US. Let’s start diving deep into the discussion.

What Role Are Scientists Playing?

Regardless of the place, scientists have always been taking great interest to explore Speciosa but they were not given enough resources and any kind of support from the government officials. They are still doing what they can do on their own.

The US-based scientists are also playing a magnificent role to perform a detailed analysis of this tree leaf. But, the different kinds of restrictions, being imposed in the country due to market regulation or banning Mitragyna, have proved to be great hurdles for them to come up with a solid conclusion.

As a co-author, Dr. Oliver and Dr. Charles published a research study in 2019. The major goal of this publication was to focus on the lack of research on Kratom and its influence.

It added that there are published reports that mislead people by presenting Mitragyna as an unsafe substance to consume. Some studies have even claimed that this herb can be deadly for consumers. However, they have failed to provide any evidence in this regard.

They explained that we can not associate Kratom with different death cases ignoring all other dangerous medications that were found in the bloodstream of victims.

Grundmann And Veltri: How Do They See The Kratom Industry?

Grundmann and Veltri quoted that science is in need of further research to understand Mitragyna in a better way. The community of Kratom in the US consists of over 15 million potential users and is expanding day by day with the hard work and efforts put in by true advocates.

They said that though the Kratom community is pretty saturated but if we try to understand the background of all the people, we will be able to see a lot of similarities in terms of what they want to achieve with this herb.

Many people plan to ingest this herb just to get rid of other harmful medications they have been taking for a long time. You can clearly see that these people consider Mitragyna as an alternative to other dangerous substances showing that they have a common motive.

Dr. Jonathan Schimmel – an active member of “Non-Medical Use of Prescription Medications” – headed a survey 2 years back in 2019. A reputed medical test – DAST10 – was used to assess the possibility of illicit substance dependence. However, the findings of this survey were diametrically opposed to the truth.

Well, Dr. Jonathan is not new to the Kratom industry but the way he conducted this survey is questionable indeed. He presented the wrong narrative by twisting the reality.

For instance, in another report (presented in January 2020), Dr. Schimmel claimed that Korth can cause liver-related complications and the report itself says that the data is based on low-quality evidence. It is pretty clear for everyone that the paper was concluded based on faulty data.

A couple of researchers – based in Malaysia – performed a study to understand what precisely is the influence of Kratom on our livers. After investing a significant amount of time doing a detailed analysis, they concluded that Speciosa consumption is not a threat even to any portion of the liver.

This study has shown that Dr. Schimmel was just misleading the whole community by portraying Kratom as a harmful substance. Therefore, both reports presented by Dr. Schimmel must be regarded with caution.

RADARS administered a survey conducted on people who were involved in using prescription and other medications for non-medical purposes. It was found that a significant number of Speciosa users switched from prescription medications to Mitragyna. As a result, the demography of those who participated in the poll differs from many users of Kratom in the US.

Dr. Grundmann presented stats to negate the false statements of Dr. Schimmel. He claimed that a number of Mitragyna consumers say that they started taking this herb to reduce their habit of consuming other illicit medications.

He, keeping in view the US-based data, further added that illicit medications are 1000 times more deadly compared to Mitragyna Speciosa.

Scientists Must Maintain Their Objectiveness

Kratom, without any doubt, is a superb botanical carrying a diverse range of properties in the presence of more than forty alkaloids. To understand this herb properly, enough research is required to establish a medical claim. As of now, individuals have conducted multiple studies but they are not usually considered credible enough at larger scales.

It is very unfortunate to say that some government bodies are funding different agencies to somehow criminalize Kratom by presenting the negative properties that are even not associated with this plant. Everyone needs to be more careful about that and it should be taken seriously to protect the Kratom in the US and across the globe at the same time.

The research must be conducted impartially without any interference to get some fruitful results. The federal government and other reputed organizations should play their positive roles to allow scientists to conduct free and fair studies. It can lead to guiding the community in the best possible way.

Kratom in the US, despite many criminalizing efforts, is getting popular at a high speed. Some studies were published to present the wrong picture of this marvelous herb. Fortunately, some intellectual researchers not only questioned false medical claims but also rejected them with valuable data collected from the whole country.

Question: Can people legally consume Kratom in the US?

Answer: Yes, the federal government doesn’t interfere in such matters making it legal for everyone to take their favorite kratom strains of Speciosa. Don’t forget that 6 states in the US have banned the consumption of Mitragyna. So, be careful when using it.

Question: Why have 6 states banned Kratom?

Answer: Every state is free to make its own decisions so 6 of the total states, taking a look at some misleading information, think that this tree leaf can be harmful to their community. Therefore, they have completely criminalized it.

Question: Do Mitragyna users in the US play their part to protect this plant?

Answer: Yes, in fact, they are pretty loyal to this tree leaf and always go the extra mile to secure its brighter future.