Kratom in Mississippi: Laws of Kratom in the Magnolia State 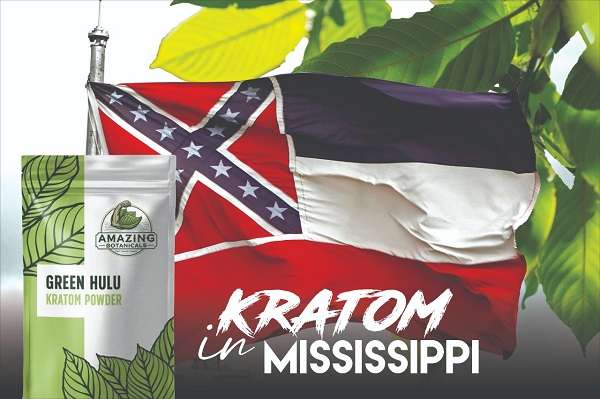 Mitragyna Speciosa or kratom has taken the world by storm over the last few years. This herb is originally grown in Southeast Asia and has been used for its medicinal purposes for a long time.

The recreational use of kratom is becoming more and more common as people find relief in its desirable effects. However, the government of the United States and the Food and Drug Administration (FDA) alike are opposed to this increasing use of kratom on the streets.

The organization has already issued several warnings regarding the herb and there have been dubious reports stating the undesirable effects of kratom. Due to this reason, it is important to keep a check on the laws regarding kratom if you are someone who uses the herb or sells it to others.

In this article, we will discuss the laws regarding the legality of kratom in Mississippi.

Is Kratom Legal in Mississippi?

The answer is not as simple as a yes or no. Kratom is legal in most of Mississippi but there are still some MS counties and towns that have decided to ban the herb in their regions. More than that, there are also persistent efforts to extend this ban to other municipalities with the end goal being a ban of kratom in the entire state. As a result, you need to be careful wherein the state you are in before you can freely sell, consume, and possess kratom.

History of Kratom in Mississippi

The history of kratom in Mississippi goes back as far as 2018. The lawmakers of the state proposed a bill that was aimed to ban the two most important components of kratom called mitragynine and 7-hydroxy mitragynine in any form. This meant that kratom could not be sold, possessed, or consumed in the state of Mississippi. However, this bill did not pass the committee and died shortly after.

Later in the same year, the governing bodies again brought up a similar bill directed to outlaw kratom and its ingredients. The motion was amended and kratom was not included in the list of drugs banned in the state,

The attempts to ban kratom did not end here. Since the attempts to completely ban the herb across the state kept failing, the authorities and citizens decided to take a different approach. This course of action focused on banning kratom not as a whole, but in different states and cities. It meant that kratom legality was taken one state and one city at a time, and each county decided its own kratom status.

The process began with Columbus City and Union County which declared kratom as a synthetic substance even though it is a naturally occurring herb. This process is similar to the law imposed in San Diego, California, and Sarasota County, Florida.

The next year, in 2019, the war against kratom was intensified. The officials and residents were not ready to give in the freedom of using and selling kratom in their state. Caledonia Town took an initiative and declared kratom illegal in the March of the same year. With this, more counties started joining the movement.

Lowndes County followed in their footsteps and decided to criminalize kratom in their region. A wave of kratom law changes occurred that year in various counties including Itawamba County, Alcorn County.

Instead of consuming a less harmful substance like kratom, the people of this county started turning towards more addictive and harmful substances such as heroin and cocaine which turned out to be disastrous.

The next year, the people advocating for the kratom ban were not discouraged by their repeated failures and remained resilient in their efforts to rid their state of this malice. On the 17th of January, 2020, Senator Charles Younger took a stand against kratom use and proposed a bill that was directed towards declaring kratom as a Schedule I drug. After this, two more bills intended for the same purpose came into being. However, all three of these bills died shortly afterward in the committee without ever passing.

Officials and governing bodies remained relentless in their efforts to criminalize the herb. In the recent year, 2021, five more bills were passed that were luckily not implemented but the committee remains adamant nonetheless.

Which Counties Have Banned Kratom?

Although kratom remains legal in most states, some municipalities have criminalized them so it is strictly forbidden to possess, use, or sell kratom in these areas.

Here is a list of those counties, about 10 in total:

And here is a list of towns that have banned kratom:

Classification of Kratom in Mississippi

The classification of kratom in Mississippi is as complicated as its legality status in the state. While it remains legal in most of the states, there are still some counties and towns that have banned its use and sale. These areas have imposed classification on this herb. They have held kratom equivalent to dangerous drugs like cocaine, heroin, methamphetamine, morphine, and other such drugs.

The Popularity of Kratom in Mississippi

The popularity of kratom in Mississippi is evident by the fact that every move that the governing bodies attempted to pass regarding the illegalization of kratom was defeated by the kratom community who always came together to fight such bills.

There has always been a large abundance of officials who wanted to simply get rid of the herb but the kratom community fought hard to keep the ban off their favorite product.

In the end, it is apparent that despite the countless efforts of the governing bodies to ban the herb, the kratom community is strong enough to ward off the imminent threat to kratom’s legality. However, it is a good habit to keep an eye out for future changes in news so that you know if you are breaking a law or not.