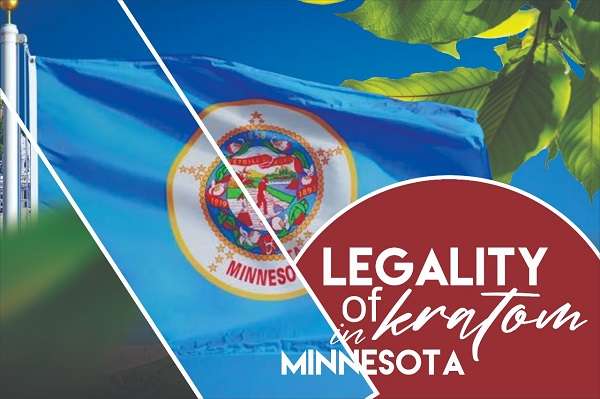 If you have not been living under a rock for the past few years, you must have heard the name of kratom or its medicinal name Mitragyna Speciosa somewhere around. It is a native plant of Southeast Asia that the locals have been using for centuries for various medicinal purposes. However, these days it is mostly gaining popularity due to its recreational effects that people are increasingly growing fond of.

In contrast, government bodies and drug regulating agencies are getting concerned about the adverse effects of this plant and its increased usage in the general public. While the government has declared it legal on a federal level, the states are still disputed over the status of kratom. Hence, the logical solution was to let each state decide for itself whether or not it wants to criminalize kratom or let it be freely bought.

In this article, we will discuss the legislature regarding kratom in Minnesota.

Is Kratom Legal in Minnesota?

If you are about to move to the state or are a tourist wondering if you can freely mix a little kratom powder to your morning coffee in Minnesota, the answer for you is yes. However, there is a little twist to this law. You are free to sell, possess, or consume kratom in Minnesota as long as you are over the age of 18. If you are over the age of 18, you can easily buy kratom all over the state including Fergus Falls, Wahpeton, Moorhead, Alexandria, Brainerd, and Willmar.

History of Kratom in Minnesota

Before declaring kratom’s freedom in Minnesota, it is important to understand that it wasn’t always like this and repeated attempts have been made by the lawmakers in the state to regulate the use of kratom in Minnesota.

The history of kratom in Minnesota dates back to the year 2018. Before this year, kratom was not that known or disputed in the state. There were no issues regarding its use, regularity, or legality in Minnesota. However, that changed in the year 2018.

This year marks an important event for the kratom community in Minnesota. A string of people was found to be getting ill after using kratom in the state. It raised suspicions for the authorities and alerted drug regulating authorities such as Food and Drug Administration (FDA). Governing bodies started looking for ways to regulate the use of kratom in the state. In the same year, an outbreak of Salmonella was reported in kratom. In Minnesota, two cases were reported which was enough for the state’s lawmakers to impose a regulation on kratom use in Minnesota.

According to the state law in Minnesota, if you sell kratom to a minor, it is considered a gross misdemeanor and is punishable by the law.

Why Did The State Restrict Kratom Use To Adults?

The lawmakers of Minnesota were not looking to prohibit a naturally occurring herb that was not directly related to the opium poppy plant. They simply wanted to keep the drugs accessible to those who were responsible enough to take them and take care of themselves afterward. Moreover, adults were less likely to overdose accidentally. The government’s aim to limit kratom to responsible adults was satisfied with this new law.

The Penalty of Possessing Contaminated Kratom in Minnesota

While it is legal to possess kratom in the state of Minnesota, carrying adulterated kratom is a legal offense. According to the state law, if you are caught in possession of adulterated kratom as in kratom mixed with other substances, you will be considered and treated as a culprit with a jail time of about 90 days.

Classification of Kratom in Minnesota

In Minnesota, there has been no definite decision regarding the classification of kratom. The government has not scheduled them with dangerous drugs such as morphine, cocaine, or heroin. In fact, the state is relatively lenient than other states that have repeatedly attempted to ban the plant in their regions.

Many states have attempted to place kratom in Schedule II drugs which requires a doctor’s prescription to attain kratom or Schedule V drugs which have relatively low abuse potential but wide medicinal use, or Schedule I drugs that are strictly illegal such as cocaine, heroin, methamphetamine, and so on. However, Minnesota lawmakers have made no such attempt.

Where Can I Get Kratom in Minnesota?

Since kratom is not banned in Minnesota, you can easily get it at any tobacco shops, vape stores, or smoke shops in the state, as long as you are over the age of 18. Here are some of the places you should check out:

All these options are great, but to be on the safe side, it is better to get your dose of kratom from an online vendor who cares about their customer experience and wants to build brand loyalty. These vendors should be certified by the American Kratom Association (AKA) so that you know that you are getting pure, uncontaminated, unadulterated, lab-tested kratom. It is important to get the highest quality product in order to avoid adverse reactions.

Kratom usage is a huge concern for most states but Minnesota is relatively lenient when it comes to kratom laws. The state has been pretty peaceful when it comes to this matter. It is legal to possess, sell, and use kratom in the state as long as you are above the age of 18.