Kratom in Massachusetts: Laws of Kratom in the Hub of New England 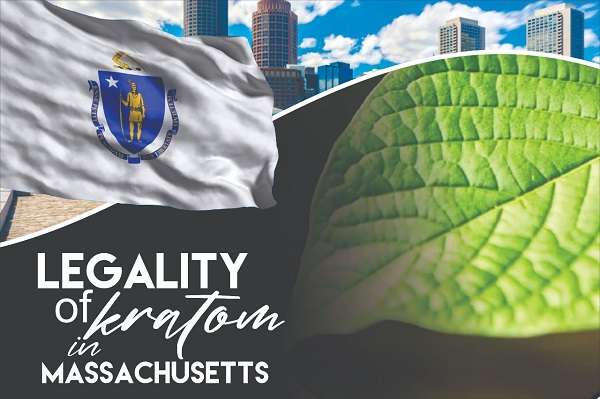 Native to Southeast Asia, kratom is a tropical evergreen tree that has been used for medicinal and recreational purposes in many cultures throughout the world. While people believe it serves a lot of good functions, kratom has also been known for a wide range of side effects.

Kratom has been gaining immense popularity lately and more and more people are willing to experiment with this herb in order to make use of its good effects. However, the reported adverse effects of the herb have raised concerns regarding the safety of the herb by the Food and Drug Administration (FDA). They have already issued several warnings regarding the herb and it is a growing suspicion among many communities.

In this article, we will discuss the legality of kratom in the state of Massachusetts and the legislation regarding this herb in the state.

Is Kratom Legal in Massachusetts?

The answer is yes. Kratom is indeed legal in Massachusetts. You can possess, consume, and sell kratom freely in this state and you will not be subjected to any legal consequences in case you are found doing either of these things.

History of Kratom in Massachusetts

While kratom is legal in Massachusetts, it does not mean that attempts were not made to ban this plant in the state before. Kratom and Massachusetts go a long way back and let’s walk you through its past.

The state’s House of Representatives has made attempts to ban the plant in the past. There have been major concerns discussed in the senate for whether or not kratom is harmful enough to ban or it can be simply regulated. The state goes back and forth between the legislation of kratom and has finally settled, for now, at making the plant legal.

Let’s begin with the year 2009. That’s how early kratom became a part of the discussion on a state level. House Bill 1789 proposed that kratom should be classified as a Class-B substance under Massachusetts law. Other drugs in this class included morphine, cocaine, LSD, methamphetamine, and so on.

If you were caught selling, consuming, or possessing these drugs, there is a definite jail time as a consequence. Other consequences can include charges as high as $1,000. However, this bill was not implemented and never progressed to the stature of law and hence died without any action. As a result, kratom was not categorized as a Class-B substance.

However, the attempts did not end here. In 2011, two years after the first bill was passed, another bill was proposed called the House Bill 526. This bill also aimed to classify kratom as a Class-B substance. It suffered the same fate as the bill before it and it died before it could make it to the legislature.

Two years after the second bill, in 2013, the lawmakers of Massachusetts contemplated over banning the plant altogether considering the rising popularity and the increased reports of kratom’s side effects. However, the bill was never passed and hence the motion failed to proceed further.

As of today, in the year 2021, kratom is legal throughout the state of Massachusetts. There have been no restrictions imposed on the possession, consumption, or sale of kratom by any city councils or county-based governing bodies. It implies that people living in the state or those visiting don’t have to worry about the consequences of consuming, selling, or possessing kratom when they are in Massachusetts.

The state has contemplated banning kratom for a while but as of now, no definite motion has been made, and hence, you are not liable to legal action right now. However, the legislature regarding kratom is pretty unstable and it is important to keep in touch with the latest news.

The Popularity of Kratom in Massachusetts

The governing bodies of the state of Massachusetts have never been truly adamant about banning the plant and so the public or communities never had to take extreme measures to demonstrate their support for the freedom to use this herb. However, the popularity of kratom is still an important factor in determining whether the plant should be banned, or regulated.

The herb is pretty popular around the Bay state judging by the number of local shops that offer it. What makes kratom production and propagation a threat in Massachusetts is the lack of regulation. To keep the governing bodies from trying to ban the plant due to its increasing dysregulation, the American Kratom Association (AKA) is making active efforts to unite the states to support the motives of the Kratom Consumer Protection Act (KCPA). This act aims to regulate the industry and make it safer for consumers to use it.

Classification of Kratom in Massachusetts

While kratom is legal in Massachusetts, it has still not been classified in any particular category due to less research regarding it, its mixed effects, and the degree of effects it has on people. Since many states have banned the plant by adding them to the Substance W list of controlled substances, there is a chance that Massachusetts lawmakers may attempt to classify the plant as a Class-B substance again. However, no further developments have been made so far, and hence, we can’t know for sure which category kratom falls into.

Where Can You Buy Kratom in Massachusetts?

Buying kratom in Massachusetts is not a problem. You can get it at any local tobacco or smoke store. However, there is an obvious concern about the purity and the safety of the drug if you buy it from these stores. You need to nitpick your vendors and get your dose from someone who lab-tested the product and delivered it without any adulterations. It is best to buy from online vendors.

Despite various attempts of the lawmakers of Massachusetts to ban kratom, it is still legal in the state. There have been no developments on its classification but as of now, it is legal to possess, consume, and sell kratom in the state of Massachusetts.

The concerns about kratom use in the state are totally valid when some studies suggest undesirable effects occurring due to the consumption of kratom. It is important to note that the laws regarding kratom possession, use, and sale in the states are a sensitive issue and the legislature related to it is rapidly changing.

Hence, it is crucial for users, keepers, and sellers to keep this in mind when they are engaging in activities related to this herb as it can get you arrested if kratom were to be declared illegal.