Kratom in Illinois- Is the Herb Legal All Over the State? 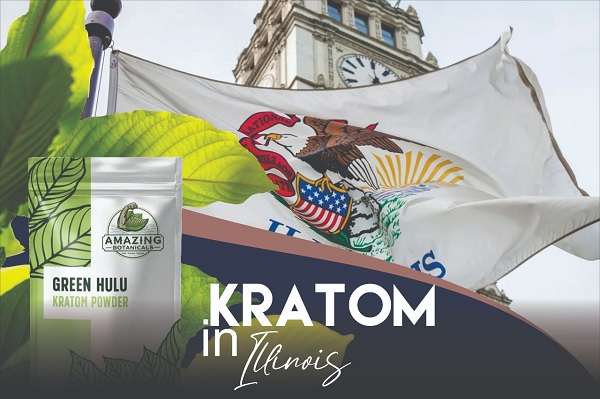 Kratom has been a controversial plant ever since it landed in the United States. The plant gained a lot of popularity after its increasing fame in the nation. This increasing demand caught a lot of negative eyes too.

And therefore the plant was banned or classified in a few states, making its sale and use completely illegal. Kratom in Illinois lies in the grey area. It is neither completely banned nor is it completely legal in the Land of Lincoln.

The legality of Kratom in Illinois depends on what city or region you live in. If you live in Alton, Jerseyville, Glen Carbon, or Edwardsville, you are in bad luck as Kratom is illegal in these four cities.

Throughout the year 2020, there was a legal battle going on in Prairie State. This battle was fought to overturn the decision of banning the herb in these three regions. But unfortunately, Kratom remains illegal for human consumption in the four above-mentioned cities.

What is the Status of Legality of Kratom in Illinois?

Other than Alton, Jerseyville, Glen Carbon, and Edwardsville you can buy Kratom anywhere in the whole state. A bill regarding the legality for the rest of the state was passed in 2014. This bill amended the Illinois Controlled Substances Act and was thus passed by the state legislature.

This amendment made the possession of Mitragyna Speciosa a misdemeanor for a minor (a person below the age of eighteen years). The act did not classify the herb and thus it was legal for human consumption statewide.

But what this act did was set an example for a bill that can ban the plant nationwide. The implementation of any such act can directly classify the herb as a Schedule I drug and this can change a lot of laws regarding Kratom in the whole U.S.

The possession can become a misdemeanor and any intention to distribute the contents can be considered a felony.

History of Kratom in Illinois’ Cities

In October 2017, a bill was introduced by a Democrat of Edwardsville to the House of Representatives of the state that suggested that the herb should be banned in the Prairie State. Thus, it had the intention to ban Kratom in Illinois.

But the bill died in the Senate in January of 2019. In March of 2020, the city of Edwardsville banned the plant and its products within the limits of the city. Thus Kratom was made illegal in four regions in Illinois.

Kratom in Illinois and the KCPA

The Kratom Consumer Protection Act was introduced in Illinois in the year 2020 on February 6th. The act was brought forward by the non-profit organization, the American Kratom Association (AKA). This group of Kratom activists is trying hard to make the herb legal for everyone in the United States.

The KCPA consists of the following bullet points:

Is the Future of Kratom in Illinois Secure?

A week after this bill was proposed, another bill was introduced to ban the herb. Though this legislation died in the committee, the future of Kratom is now at stake.

There are still no regulations over the plant, and so its legality in the Land of Lincoln remains unpredictable. No one knows what the future holds. But as for now, Kratom in Illinois is legal all over the state except for four regions.

What is the Safe Dose of Kratom that does not get You High?

If you are a newbie in the Kratom world, you need to make sure of a couple of things before starting on this new journey. You should not buy your herb and thus the products from random vendors that pop up when you search for Kratom near me.

Look for at least high-quality Kratom if you can not invest in the premium quality strains and veins. Buying cheap Kratom is never a good option but buying expensive Kratom from a local vendor that is not even up to the quality standards is even worse.

All of your Mitragyna Speciosa products should be consumed in low to moderate doses. The low dosage is suggested for new consumers that have recently hopped on the Kratom bandwagon. This low dosage usually ranges from one to three grams, and a similar dosage is recommended in the case of capsules too.

If you get a hold of these items and are now confident in what you are consuming and thus have control over the substance, you can increase your dosage up to a moderate or standard dose. But do not exceed the limits. Even the weaker veins have a limit of up to eight grams. An increased dose is a potential risk factor for your body and can cause unwanted side effects.

Kratom Near Me- Local Shops of Kratom in Illinois

The plant is available in all major cities of Illinois excluding the above-mentioned four cities. You can buy the herb and its sub-items in Chicago, Rockford, Elgin, Peoria, and Naperville. Below is a list of some local shops of Kratom in Illinois:

You can even check out online vendors if there are no reliable local shops available in your area. Never settle for less when it comes to purchasing and consuming substances like Kratom. You can check out the following online vendors: