Kratom In France: Can I Legally Buy & Consume This Botanical? 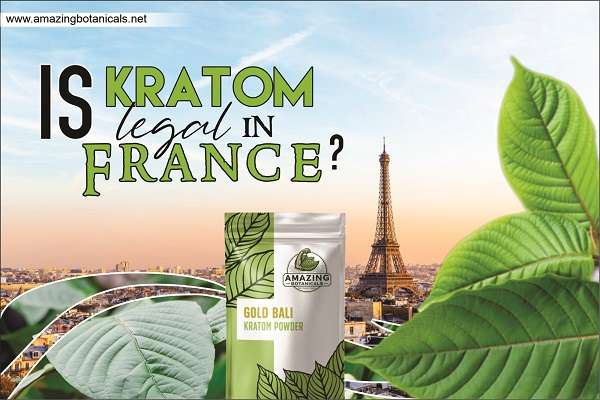 Kratom in France has been a hot debate for a while. The local community, just like many other parts of the globe, is getting attracted to this botanical. This attraction was linked to the unique potency and other wonderful properties of Speciosa. It is not only popular in France but other regions throughout the world equally recognize it as well.

France is a reputed country located in the heart of Western Europe. It is home to Eiffel Tower – the most creative and distinctive design built in Paris in 1889 for the World’s Fair.

In addition, France offers a wide range of delectable cuisines, art galleries, and museums. Moreover, the presence of beautiful mountains and landscapes along with several tourist destinations have proved to be very effective in grabbing the attention of overseas visitors. This is why thousands of individuals from across the globe travel to this country just to explore its beauty.

Many visitors who love to ingest Speciosa usually ask about the availability of Kratom in France. Are you looking for the same? Don’t know whether or not you can consume this tree leaf over there? If yes, don’t miss reading through the discussion below. Let’s get it started.

What Is The Legal Status Of Kratom In France?

Well, Kratom has always been in trouble when it comes to its legality. The basic reasons why this herb is facing these challenges are the lack of human clinical trials and lack of research studies to provide some solid medical evidence supporting Speciosa consumption.

Keeping in view these factors, the official bodies of the United States including the FDA, CDC, and DEA are continuously attempting to somehow outlaw Mitragyna from the country. They have tried to convince policymakers a couple of times but didn’t get successful.

As far as the laws on Kratom in France are concerned, it is very hard to say that this plant material is no longer a legal substance in this country. In January 2020, an article “R5132-8” was presented to ban Speciosa and the French authorities not only accepted it but implemented it throughout the country. France, without a doubt, is listed at the top among the liberal regions, but not when it comes to keeping Kratom alive.

With this ban, a great impact has been observed in the global industry. In fact, the whole European Union started considering Kratom an extremely controversial herbal supplement. It is indeed a bad thing for the reputation of this botanical. What do you say?

Right after the criminalization of Mitragyna, the French government restricted the production, sale, purchase, consumption, import, export, and transport of this plant material. It is not allowed either for personal uses or for research purposes. Luckily, this is not a typical trend in the European Union because most members don’t accept this ban.

What Caused The Kratom Ban In France?

Getting familiar with the root cause of this criminalization is a must to offer individual and collective support to make Kratom legal in France. It is very unfortunate to say that the FDA has been spreading misinformation regarding Speciosa for many years.

The FDA has claimed that Mitragyna consumption has caused dozens of fatalities in the US. Though it was unable to provide any medical evidence supporting this argument, the French official bodies have outlawed Kratom keeping in mind the FDA concerns.

A couple of deaths were reported in the US due to Kratom consumption. But, right after the detailed medical check-up, the doctors and other medical specialists presented a report claiming that the deceased individuals tested positive for other dangerous medications as well. It is a clear indication that Kratom was not the cause of their deaths.

A number of research-based surveys have proved that Mitragyna has been doing wonders for millions of people for hundreds of years. The same scenario is exceptionally presented in a popular Kratom documentary – A Leaf of Faith.

How Did Kratom Users React To This Criminalization?

To better understand how people reacted to this ban, you can explore different online forums (like Reddit) where Speciosa users frequently discuss Kratom and the factors associated with this magical herb.

The avid users were really upset because Speciosa was a regular part of their diet and they can’t benefit from it anymore. Many users are not even ready to accept this restriction.

Some of them are still hopeful and they are praying for a new government to come, overturn these laws, and make Kratom legal to consume everywhere.

It clearly seems that no one living or staying in France is happy with this Kratom ban. It would be much better if the French government bodies conduct surveys to ask the public about how they want to see this botanical and make the decision accordingly.

Where Can I Purchase Kratom In France?

From the above discussion, you will be aware of the fact that you can’t access, buy, sell, or consume Kratom in France. What people do to get this herb is that they get connected to black sellers in the market and ask them to give desired Mitragyna variants. It is not a legal activity; therefore, don’t try to do that.

There are many users who benefit from mail forwarding resources (e.g., Skypax) and order their favorite Kratom strains from a legal Korth seller. It is not that dangerous compared to the earlier approach but still, it is not legal as well.

What Does The Future Of Kratom In France Hold?

The French authorities amended the Kratom laws only two years ago. Therefore, you can’t expect them to introduce further changes in the near future. If someone tries to buy or consume Kratom in France, he or she will be punished accordingly because it is a criminal offense as per the laws of the country.

Doesn’t matter if you want to take this botanical for research purposes or for personal uses, everything is declared illegal.

However, the good news is that the vast majority of the European Union is decriminalizing Kratom. The French community would be more than happy if this trend comes to this country as well somewhere in the near future.

Are you in love with taking Mitragyna? Can’t miss consuming this plant material? Worried about the legal status of Kratom in France? Well, the unfortunate news is that this herb is no longer legal in this country.

We understand that you won’t be happy to hear this. If you want to get into the detailed specifics like the future of Kratom in this region, don’t forget to read through the discussion presented above. It will hardly take a few minutes of yours.

Can I ask online sellers to ship Kratom to France?

No, you can’t do that. The online sellers never ship their products to the regions where Speciosa is declared illegal to consume. If some sellers are asking you to pay for the products and are claiming that they will deliver your Speciosa to France, it would definitely be a scam. Keep yourself away from that.

What is the punishment for consuming Mitragyna in the country?

Since Kratom is an illicit substance; therefore, consuming it will expose you to 1-year imprisonment and up to a 3,750 euros fine. This penalty is defined in article L3421-1. It is better to keep yourself away from Kratom consumption until it becomes legal again. It will help you avoid facing these challenges.

Why do people love to ingest Kratom in France?

Well, this is not the case with the French community only. The same trend is being followed around the world. Many people in France had added Kratom to their daily routines and they were pretty happy with the outcomes. Right after it got banned, they got really upset with this decision of the federal government.