Kratom in California- Is the Herb Legal in the Hollywood State? 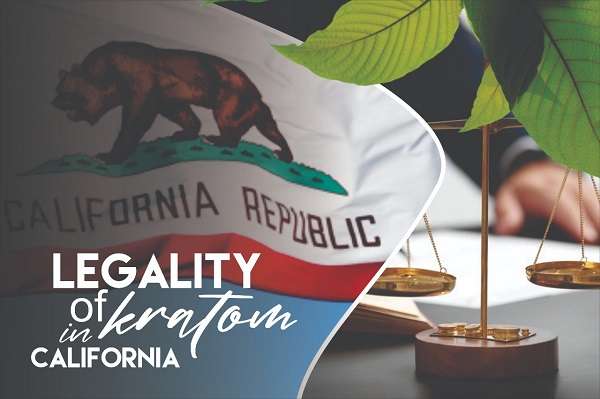 California is famous for its tourist attractions like Disneyland, or the grand Hollywood sign. Along with being the home of these attractions, it is a safe space for Mitragyna Speciosa users too.

Kratom is legal in the state of California. Although there are some exceptions like San Diego. Ever since the Food and Drug Association (FDA) decided to leave legislation regarding the use of the plant on individual state and county laws, every government set up its ordinances and rules concerning the herb.

Kratom in California lies in the grey area, neither the plant is banned completely in the state, nor is it completely legal. The unsure nature of the plant thus provokes a question between the enthusiasts in California; will the herb stay legal in the future? There are no certain answers to this question.

Until and unless Mitragyna Speciosa becomes a regulated substance on the federal level, there is no guarantee for its legal usage on a state level. Many states decided to impose a complete ban over the herb back when Kratom gained a lot of popularity among the users.

However, the state of California took no such steps and they decided to make the use and any business that is related to the plant completely legal. San Diego passed its ordinances and decided to impose a complete ban over Mitragyna Speciosa.

In 2016, the city of San Diego in the San Diego County imposed a complete ban on the Kratom plant, and the reason that the officials presented while imposing this ban was that there is a lack of evident research that supports the use of Mitragyna Speciosa.

The San Diego County argued that there is not enough evidence that proves that the herb is safe for human consumption. Instead of setting up a committee of researchers or scientists to evaluate the contents of the plant, they put an embargo on it.

The lack of conspicuous investigation on the Kratom plant of the Rubiaceae family is what causes most of the issues related to its usage. And this is why San Diego has classified the substance as a Schedule 1 drug.

Substances that are included in the Schedule 1 drug list are potentially harmful and addictive ones, and placing Kratom on this list can cause long-term harm to the reputation of the whole Kratom industry.

The Popularity of Kratom in California

Like other popular locations, Kratom in California is also a good tourist attraction. You will easily find the herb in smoke shops or tobacco shops. You can even search for these shops by typing Kratom near me on your navigation or search bar.

Unlike San Diego, the herb is quite admired in the rest of the state of California. You can easily find it in your locality and get it shipped to your address as long as there are no laws in your residency that ban the use of Kratom.

Is the Use of Kratom in California a Felony?

There are no laws that implement a ban on the possession or consumption of the plant, so you can use Kratom in California freely in public without the fear of being caught by an official. But a similar act in the city of San Diego County where the herb is banned will be considered as a misdemeanor.

In the rest of California, you can carry it anywhere with you in public spaces. But it is better to carry the substance in its original packaging, so anytime any officer stops you and blames you for possessing illegal drugs, you can justify your items by showing the original pack and proving that the herb is eligible to use.

How Should You Travel with Kratom in Your Bag?

While traveling with Kratom in California, you can bring the products in your checked-in luggage. Carrying them in their authentic and untouched packaging will give solid proof that the items are not illegitimate.

However, if you are traveling with the items to the city of San Diego, or have a stopover in the city, it is recommended that you do not travel with any products of your Mitragyna Speciosa plant.

The city council considers Kratom as an illicit item and thus they can convict or arrest you for keeping the herb or its products in your bag.

The Different Veins of Kratom and their Uses

Kratom comes in three different primary varieties; red, white, and green. But recently a unique blend of the green and white vein has created a fourth vein of Kratom, the yellow vein.

Each vein has its unique use and is of many other subtypes that are referred to as Kratom strains. These strains tell the origin of that particular Kratom vein. You can find almost every vein of Kratom in California. Just search for your preferred choice on the site of a trusted vendor.

The red vein is considered the most potent and is used for its sedative-like effects for calming and relaxation purposes. The white vein has the opposite effect and it produces a boost in the user’s energy levels. The green and the yellow veins are neutral ones and their effects lie in between the red and white veins.

If you are a beginner it is recommended that you start with a dose of one to three grams so that you do not experience any harsh side effects. Another disadvantage of a higher dosage is that you might slowly start to build dependency on the substance.

This dependency can eventually build tolerance in your body against the herb, and that causes unwanted adverse reactions. To avoid these situations, it is better to start with a smaller dosage and then gradually amp your levels up.

Kratom Near Me- Buy Kratom in California

You can find your favorite herb easily in your locality and if there are no trustworthy shops available nearby, you can always order online. Purchasing the herb online is a better idea and it can help you choose the right vein, strain, and vendor for the long run.

Try to buy from vendors that are certified by the GMP and work per guidelines set forth by the American Kratom Association (AKA). Here is a list of trusted vendors to get you started on your Kratom journey:

It is better to buy your natural herbs from a trusted source as this will guarantee that your items are free from any contamination or adulteration. There have been cases in 2018 regarding the toxicity of the plant’s products, so it is better to choose from a vendor that sells safe items.