Kratom Ban: A List Of Countries That Prohibit The Use Of Speciosa 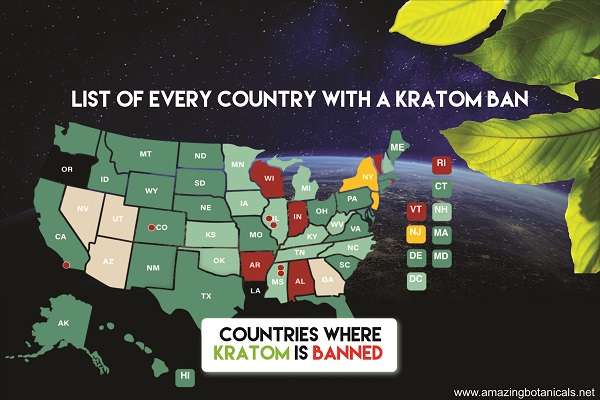 The Kratom ban is one of the most common challenges the Speciosa industry has been facing for a couple of decades. The Kratom, without a doubt, is a wonderful and magical herb that has been serving human beings for hundreds of years. The Southeast Asian community has been using this plant for various medicinal purposes.

Some authorities like FDA and DEA and other individuals have taken a couple of steps to criminalize Speciosa because they consider that it is not a safe substance to take. The legal status of Kratom is a bit confusing for Mitragyna users, especially for the ones who are planning to start their journeys.

This herb is legal to consume in many parts of the world just because of the positive role played by true Speciosa enthusiasts. But, at the same time, there are some cities, states, counties, and countries that haven’t yet allowed their people to consume this plant. Are you concerned about the countries with a Kratom ban? Looking to get familiar with the laws? This is a perfect read for you. Let’s get down to business.

What Precisely Is The Reason Behind Imposing Kratom Ban?

Mitragyna Speciosa consists of more than 40 chemical compounds that are commonly known as alkaloids. Out of all, 2 alkaloids are higher in concentration and therefore, they have a great impact on the overall influence of the plant. These two alkaloids include 7-hydroxy-mitragynine and mitragynine.

Some authorities and individuals consider that these alkaloids are not safe for human beings and they can cause severe complications. In some regions, the media has given this herb negative coverage and there are some reports claiming that this plant has caused a couple of deaths in the past. These are not yet verified by any authentic department.

The popularity of Kratom has increased in the last 10 years and a lot of research and clinical trials are still required in this domain. The lack of research is also one of the reasons why different countries and states impose the Kratom ban.

A list of countries that prohibit the use of Korth, either within the whole premises or in some regions, is given below.

Is Kratom Banned In The US?

The federal government has not imposed any ban or regulation on the use and sale of Speciosa. However, the states, counties, and cities are free to make their own decisions in this regard.

Overall, this tree leaf is legal to consume in almost all states of the US except 6 including Arkansas, Wisconsin, Alabama, Rhode Island, Vermont, and Indiana. If you are living in any of these states, unfortunately, you would not be able to enjoy Korth.

This country has no particular law on Kratom but any substance that can make you psychoactive is prohibited. Many people think that Speciosa can exhibit similar properties; therefore, the cultivation, sale, purchase, and import of this plant is banned in the UK.

Legality of Kratom in Switzerland

The Narcotics Act of this country does not allow you to consume a substance having 7-hydroxy-mitragynine and mitragynine. Therefore, possessing or consuming Mitragyna are considered criminal activities.

Emergency ordinance number 06/2010 of the country made Speciosa a narcotic substance. So, Korth consumption is strictly prohibited.

Laws of Kratom in Thailand

You are not allowed to take Mitragyna for recreational purposes in this region. However, there is no objection to the use of this tree leaf for research or medical purposes.

Ordinance number 154/2013 added Speciosa to the family of psychoactive substances. So, distribution, import, and export are currently banned. If you want this herb for personal use, there is no restriction to that.

In 2012, the ministry of health declared 7-hydroxy-mitragynine and mitragynine controlled substances and therefore, you can not think of taking this herb within the premises of the country.

Speciosa is considered a controlled substance in this country. So, any kind of consumption and Korth-related business is not allowed.

This region also considers major Mitragyna alkaloids as psychoactive compounds prohibiting the use of this ancient plant.

Status of Korth in Italy

In 2016, the health ministry claimed that Mitragyna is a narcotic substance and imposed a complete ban on it.

Lelag Aspects of Ketum in Indonesia

The alkaloids are a major concern for the local authorities making Kratom a serious challenge for the distributors and local users.

“Journal of Forensic Sciences” claims that Israel has either made Korth a controlled compound or illegal.

Legal Status of Korth in Malaysia

The “Positions Act of 1952” does not allow the production and distribution of Mitragyna in this country.

The official gazette of the country classified Kratom as an illicit herb in 2019. So, you can not consume it over there.

Kratom is either a controlled or an illegal product in this region and “Journal of Forensic Sciences” owns this statement.

It is also one of the countries where Speciosa is either considered a controlled herb or an illegal product for human beings to consume.

Laws of Ketum in Poland

The consumption and distribution of Speciosa are also prohibited in this country because they consider it a controlled herbal product.

In 2017, both 7-hydroxy-mitragynine and mitragynine were added to the family of Schedule-I medications. So, taking Speciosa means you’re going against the country’s laws.

Laws of Korth in Moldova

The decision 853 taken in 2010 had classified Korth as a psychotropic product; therefore, you can not ingest it here.

Legal Status of Kratom in France

The possession and trade of products having 7-hydroxy-mitragynine and mitragynine are prohibited according to “decree 23”. Mitragyna was added to the psychotropic list in 2019.

Laws About Korth in Singapore

Both 7-hydroxy-mitragynine and mitragynine are added to Schedule-I medications. So, production and distribution are not allowed.

Here in this country, Speciosa is either a controlled medication or an illegal herb as reported in the “Journal of Forensic Sciences”.

The status of Kratom over there is pretty similar to that of Norway i.e., controlled substance or illegal plant.

The Mitragyna alkaloids are considered illegal in Germany making this herb illegal for human consumption.

Legal Status of Ketum in Denmark

It considers Korth a narcotic item since 2008. Therefore, consumption, import, export, and distribution are strictly prohibited.

You can not use Kratom in this country without a medical prescription.

The relevant departments have imposed a Kratom ban on the consumer market; therefore, sales and purchases are illegal.

The possession of Kratom along with its cultivation and distribution is not allowed because the state considers this herb a narcotic product.

“Regulation 73” claims that mitragynine is a narcotic substance. So, the use of Speciosa is prohibited.

Two major Mitragyna alkaloids – 7-hydroxy-mitragynine and mitragynine are not allowed to be consumed, making it an illegal herb.

Legal Status of Korth in Argentina

According to “Decree 69/2017”, Korth is a narcotic medication so, no one can take it within the premises of Argentina.

Kratom is considered a Schedule 9 substance making consumption and sale illegal in the whole country.

Kratom Ban is a serious challenge being faced by true Speciosa enthusiasts. A complete list of the countries that prohibit the use of Mitragyna is presented above.

Question: What if I consume Speciosa if there is a Kratom ban in my region?

Answer: Well, it depends on the laws in your area. Some regions charge heavy fines if you get caught red-handed. Whereas, you may be sent to jail in some places. Similarly, many areas charge fines and send you to jail at the same time.

Question: Is there any official authority that doesn’t support Kratom consumption?

Answer: Yes, FDA and DEA have made a couple of attempts to ban Kratom.

Question: Who is the biggest supporter of Speciosa?