WHO And UN Discuss An International Kratom Ban 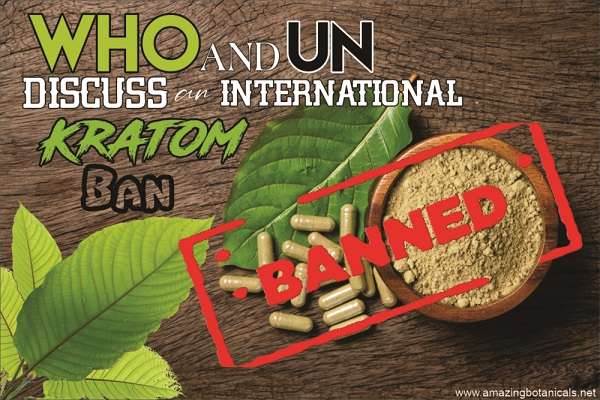 Following a scientific study, the United Nations World Health Organization (WHO) has decided not to propose the plant-derived substance be prohibited internationally.

Members of the ECDD decided 11-1 to simply continue studying data on ketum’s health effects for the next two to three years, rather than imposing severe limits. Members concluded that there is “insufficient evidence” to warrant a more in-depth critical review of kratom at this time.

While the decision was based on a scientific review of kratom’s risk of overdose, abuse potential, and therapeutic applications, proponents also highlighted the fact that nearly 80,000 people submitted comments to the panel, sharing their perspectives and experiences with the plant-derived substance.

“The Committee evaluated information about kratom’s traditional use as well as research into potential medical applications,” it went on to say. “There is insufficient data to urge a critical review of mitragyna speciosa,” the committee said.

Instead, the panel recommends that “continue to be monitored by the WHO Secretariat,” as it has been since 2020.

According to Mac Haddow, senior fellow on public policy for the American Kratom Association (AKA), this is “all around a positive outcome for science” that he believes will lead to regulatory action on ketum by the US Food and Drug Administration (FDA).

“The primary concern with korth today in the United States is a poorly regulated market, which allows bad ketum merchants to adulterate products with hazardous narcotics like fentanyl, heroin, and morphine.”

It is not currently listed as a controlled substance under the federal Controlled Substances Act or any international drug treaties to which the United States is a party. The FDA has contemplated imposing limitations on the substance, but has run into opposition and is unable to do so at this time.

Some proponents speculated that, because the agency has yet to establish a domestic ban on speciosa, it would use the WHO convention as an opportunity to have prohibition enacted worldwide, forcing the country to comply.

A bipartisan and bicameral group of lawmakers wrote to the secretary of the US Department of Health and Human Services and the country’s UN ambassador, urging them to oppose efforts to impose an international ban on ketum.

The senators claimed there has been “no solid evidence that would warrant the United States voting in favor of an international control of this chemical” as federal agencies have debated the merits of scheduling kratom in recent years.

The House Appropriations Committee authorized a report to spending legislation that stated that federal health agencies “contributed to the further research of the health implications of kratom, particularly its constituent chemicals, mitragynine and 7-hydroxymitragynine.

The panel also instructed the Secretary of Health and Human Services to desist from recommending that kratom be classified as a Schedule I substance.

Late last year, the Agency for Healthcare Research and Quality (AHRQ) sought the public for assistance in locating studies that examine the risks and benefits of cannabinoids and kratom in form of powder and capsules.

Last year, the Centers for Disease Control and Prevention (CDC) received over a thousand comments about ketum as part of another public request.

The United States’ Relationship With The UN

The United Nations is an intergovernmental body that governs a huge number of countries. On numerous occasions, though, the United States prefers to march to the tune of its own band. For example, The International Criminal Court (ICC) was founded, through a negotiated treaty inside the United Nations called the Rome Statute. The US, on the other hand, refuses to recognise the ICC’s authority over US policies or military confrontations.

On other global infrastructure platforms, however, the United States follows the UN’s rules. One of the initiatives where the two parties agree is the UN-mandated drug policy. Because the United States gives the greatest money to the WHO, it has a significant influence over the organization’s worldwide agenda.

Mac Haddow, the American Kratom Association’s (AKA) Senior Fellow on Public Policy, recently broadcast a livestream notifying supporters of the FDA’s intention to engage in political persuasion with the WHO over a ketum ban.

If the UN decides to include mitragyna speciosa on its list of illegal narcotics, the global trade in the material will come to a standstill. As a result, there is a race against time to ensure that kratom users’ voices are heard at the United Nations.

Your formal remarks that testify about the benefits of kratom are also needed in other areas, in addition to leaving testimonies on the Federal Register Portal and the AKA website. Giving your family, friends, and neighbors your personal redemption stories gives people a firsthand testimony of the amazing herb from someone they can trust. And, after a comprehensive discussion with them, you might find that it is beneficial to their lifestyles as well.

Plus, by allowing skeptics to experience how the plant works firsthand, the ketum community will acquire more proponents who will speak out about it. As a result, the community expands and becomes more prominent.

Some people get their herbs through local smoke shops. Customers should also take advantage of the chance to tell the business owners of the current situation, as they may be ignorant of the law issue.

Furthermore, those enterprises have access to kratom customers who may be unaware of the WHO situation. Getting the message out to them that more ketum  testimonials are needed in the system provides supporters additional weapons in their fight against the political impasse.

Nonetheless, the continuous political battle for kratom legalization necessitates a substantial financial investment. Lobbyists for the government aren’t cheap. As a result, every dollar you provide to the American Kratom Association helps the organization maintain a competitive advantage in future legislative endeavors. It’s also a tax write-off!