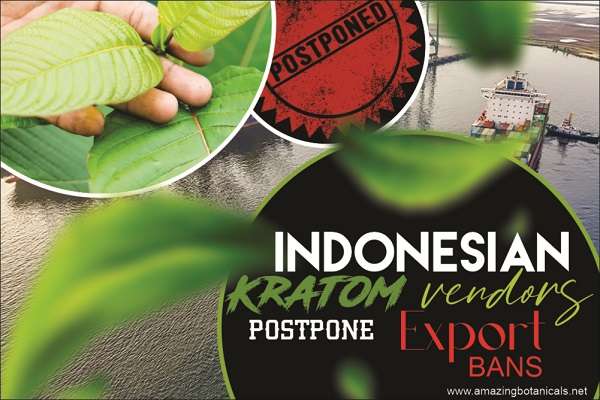 Indonesia produces the majority of the world’s commercial kratom. Indonesian kratom supply would be badly harmed by a ban. In Indonesia, it is illegal to sell botanicals as food or medicine, but because it grows wild there, individuals who use it can simply obtain it from native trees. Growing and harvesting ketum for export is permitted in Indonesia.

In recent years, the legal ketum export market in Indonesia has been attacked. To the best of our knowledge, exporting ketum will be lawful at least until 2024. However, a ban is not a sure thing. Many Indonesian officials have expressed an interest in keeping speciosa legal. The Minister of Agriculture issued a proclamation declaring speciosa a therapeutic plant, potentially reversing any earlier classification of it as a narcotic.

Threats to the Kratom Supply Chain Around the World

Despite the fact that mitragyna is Indonesia’s most valuable cash crop, Indonesia’s version of the US Drug Enforcement Agency, known as the BNN, has long been hostile to local ketum dealers. The agency has been pressing for a ban on Indonesian shipments, effectively restricting the world kratom supply chain.

As of November 2019, Indonesian news outlets claimed that it would be totally banned in the country by 2022. This came after the BNN appeared to reclassify mitragyna speciosa as a Class I narcotic, putting it on the same level as heroin, methamphetamines, and cocaine.

The Pontianak Post stated in August 2020 that it has been legally classed, allowing it to be grown and exported for “legitimate medicinal raw materials.”

The BNN continued to discuss the kratom ban later that month, but with a new start date of 2024.

Despite the supposed start date of 2024, some BNN forces have been pressing for more steps against Indonesian ketum merchants and global shipments. It’s a threat to kratom’s future that could have global implications.

The American Kratom Association, thankfully, is on the case.

The Details Of Indonesia’s Kratom Ban In 2022

The Indonesian National Narcotics Agency (BNN) established new rules in April 2019 making speciosa illegal in the country. The BNN took this action in response to misinformation from Big Pharma and the US Food and Drug Administration (FDA). Despite the fact that there has never been a scientifically documented death in history, this misinformation claims that it is harmful and deadly.

The BNN decided to postpone the ban for another five years, until the beginning of 2024, to allow farmers to switch to other crops. In essence, a large portion of the Indonesian population relies on speciosa cultivation for a living, and the BNN agreed to allow Indonesian farmers time to start producing other crops besides Ketum so that the prohibition would not put them out of business.

Negotiations Between the American Kratom Association and the BNN

Mac Haddow, Senior Fellow of Public Policy at the AKA, announced that their negotiations with the BNN, Indonesia’s drug enforcement agency, had come to a successful conclusion.

The news includes an important update on the future of Indonesian ketum production and supply.

Haddow discusses the AKA’s progress in protecting the future of Indonesian ketum in the announcement. According to the release, they had secured a formal agreement with the BNN, which states that “between now and 2024, there will be no restrictions on korth exports.”

That may not seem like major news; after all, several BNN officials had previously stated that a ban on exports would be implemented in 2024.

Those prior discussions, however, were nothing more than idle supposition. The announcement by the AKA refers to something much bigger: a formal change in policy prohibiting action against vendors.

That’s fantastic news for kratom enthusiasts all across the world.

What Does The Delay Of The Export Ban Mean?

According to the AKA release, the BNN has formally postponed their proposed export ban until 2024. That’s incredible news for the global speciosa industry. It opens up the possibility of more advocacy, education, and maybe a reversal of the scheduled ban.

It buys time above anything else. Furthermore it’s time for supporters like AKA, as well as organizations to support them, to make their voices known, win over those who oppose its access, and even secure alternate supplies.

However, all of this requires a tremendous lot of hard work. And, as usual, the AKA leads the charge.

A Kratom Ban in Indonesia Would Have Terrible Consequences

An Indonesian Kratom ban would be significant because Indonesia produces 95% of the world’s Ketum. In fact, almost every retailer in the United States imports their product entirely from Indonesia. As a result, if Indonesia prohibits the use of ketum, the supply in the United States may become rare. Prices would increase to hundreds, if not thousands, of dollars per kilo, and even at those levels, finding any ketum would be tough. In the end, most of the 15 million Americans who consume ketum will be unable to buy it, resulting in widespread suffering.

To sum it up, Indonesia holds the key to the global future of mitragyna speciosa.

Indonesia produces the vast majority of the world’s ketum. Even though the strains they sell are described as being from another region, many retailers only stock Indonesian herbs (such as Thai).

Many other Southeast Asian regions have traditionally provided a higher share of global supplies. However, as more countries impose regional prohibitions, Indonesia has emerged as the main remaining source.

Simply said, the global market is completely reliant on Indonesian supplies. As a result, outlawing ketum would wreak havoc on the market, disrupting supply of products, drastically limiting customers’ access to speciosa around the world, and rising costs as supply lines vanish.

While the formal delay of Indonesia’s kratom export ban is good news, it is far from the end of the fight. After all, even if Indonesia does prohibit it in 2024, the worldwide ketum supply will be crippled.

Haddow shares an insight into the AKA’s next set of aims in the release.

He stresses that the AKA will make good use of the interim time. They’ll be “working with various ministries… in Indonesia to explain with them the scientific basis for the safety of kratom and how it might benefit… consumers all over the world [and] their own population there in Indonesia.”

They’ll also focus on maintaining price stability, which will ensure that Indonesian vendors are fairly compensated while also improving supply in the United States.

It’s a two-pronged strategy: on the one side, education on kratom’s science and safety, and on the other, economic incentives to keep exports going.

The AKA hopes to succeed in overturning the planned export ban by appealing to both the mind and the wallet. These measures, if successful, would secure the worldwide future of kratom and assure a regular, fair income for Indonesian kratom vendors in perpetuity.

We’ll have to wait and see if their attempts are successful. However, history has shown that no one is more suited for the role than the American Kratom Association.