What Are Dr. Oz’s Opinions On Kratom? A Healthy Debate 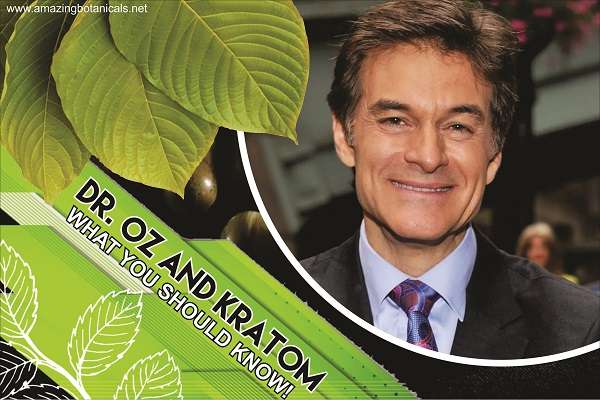 Dr. Oz’s opinions on Kratom are similar to many people but at the same time, they are opposite to the expectations of some individuals and official authorities. However, it is a hot debate without any doubt and a couple of online forums have started discussing this subject.

Many people have been presenting their personal opinions on Kratom in the past and Dr. Oz has also done the same.

The thing is; the opinions or reviews of individuals are not so influential and can’t affect the legal status of Speciosa in the whole world. If this is the purpose, different companies, federal bodies, and Kratom advocates should put in their collaborative efforts in parallel.

It would have a great impact on the Mitragyna legality not only in the United States but also around the world.

There are some scientists who have tried to utilize their own limited resources to conduct research studies and perform some clinical trials.

These trials were mostly performed on rats. But, obviously, the resources associated with the individuals were very limited and no federal body has supported them. Before going into the details of what are Dr. Oz’s opinions on Kratom, let’s have a look at who precisely is Dr. Oz?

What Should You Know About Dr. Oz?

Dr. Oz – a Turkish American – is a famous American television personality who is an author, educator, and surgeon at the same time. He was born on 11 June 1960 and started his career back in 1982.

He started hosting a popular TV show in 2009 named “The Dr. Oz Show”. The major goal behind planning this show was to have a healthy discussion on health and other medical concerns. Furthermore, he was an active writer of the famous “You Series”.

Dr. Oz focused on promoting pseudoscience and in return, he got tons of criticism from government officials, authors, medical professionals, and many others. The reason behind this criticism was; he was endorsing different products with no medical evidence.

The 45th US President – Donald Trump – made Dr. Oz a member of the President’s Council on Nutrition, Fitness, and Sports. But, this guide is particularly concerned about Dr. Oz’s opinions on Kratom. Let’s get down to business.

What Actually Are Dr. Oz’s Opinions On Kratom?

Four years back from now on 17th January 2017, a specific segment of “The Dr. Oz Show” was gone live. Joy Atencio, Hamilton Morris, and Dr. Charles Michael were invited to participate as guests in this show. Atencio has claimed that her son died due to consuming Kratom.

However, there is no solid evidence in this regard. Charles Michael was serving the University of Connecticut and was leading its pharmaceutical domain at that time. Hamilton Morris, on the other hand, is a scientific researcher and a journalist at the same time.

Important Note: Never rely on the experiences, advice, or opinions of others when it comes to Kratom consumption. Whenever you plan to take this plant, the best approach is to consult your family health professional to get a prescription according to your health.

It will be pretty useful for you to get the maximum out of any Kratom strain. On the other hand, relying on someone else’s advice can put you in trouble.

A Huge Community Got Connected To The Show

A huge community of viewers is directly associated with Dr. Oz’s popular show and on average, somewhere around 2.5 million people watch his show on a daily basis. Taking a look at the panel of relevant guests, viewers were excited to listen to a healthy discussion on Kratom between Dr. Oz and other guests.

Enough time to speak was given to the guests because they were more relevant to Mitragyna and each of them was having the potential to share some solid stuff. But, many viewers were anxiously waiting for Dr. Oz’s opinions on Kratom.

What Did Dr. Charles Michael Say?

Considering his medical background, Charles Michael shared his different views focused on how Mitragyna goes to your bloodstream and how it starts acting.

In the end, he clearly mentioned that he is sharing all the information using his limited knowledge and he said that enough human trials and research are required to be able to establish any sort of medical claim.

The mother of Guy Garcia – Joy Atencio – shared the incident of how she and her husband lost their 36 years old son in 2013 just because of consuming Speciosa. If you see the death certificate of Guy Garcia, you will find mitragynine as a major source of death.

The parents said that Guy Garcia was absolutely fine with not even a single symptom of any disease. Everything happened immediately and the mother and father were not even able to bear such a huge loss.

Later on, with a detailed medical examination, it was found that Guy Garcia was involved in taking Kratom but this was not an issue because it was a legal substance within the United States. But, the fact is; he had taken an overdose of this ancient herb that was possibly the cause of sudden death.

After having such a great loss, Joy Atencio, her husband, and Garcia’s wife started warning other people who were fond of consuming Mitragyna, especially the ones with the habit of overdosing on Kratom.

Atencio added that she often sees people discussing on different online platforms and they simply claim that Speciosa is not a harmful substance and its consumption is not a big deal at all. She mentioned that she considers this tree leaf the most dangerous herb on the planet because it has killed her precious son.

In addition, Guy Garcia’s wife – Carrie has also given a statement and said that Garcia was pretty healthy and was living a good life but unfortunately, Kratom has immediately taken his life from him.

This is so sad to hear such a heart-cracking story and we can not even imagine the pain of Guy Garcia’s family (father, mother, and wife).

How Did Hamilton Morris Participate?

He said that he has gone to Southeast Asia to have a detailed discussion about Guy Garcia’s death with expert medical professionals. They simply refused to accept it and quickly stated that no death is associated with Kratom.

Moreover, the professionals said that the report (7-hydroxy-mitragynine) of Garcia was changed from “positive” to “intermediate”. They further added that no one has calculated the contents of 7-hydroxy-mitragynine in the bloodstream of the deceased guy.

It was simply said that Kratom was found in his body which is not enough to blame this herb. There must be some solid proof and medical documents to support this claim.

How Did Dr. Oz & His Panel Sum Up The Discussion?

Dr. Oz’s opinions on Kratom were similar to his guests – Charles Michael and Hamilton Morris. After having a healthy debate on the nature of Kratom, all agreed on a single point that more studies and trials on human beings are required to provide the community with some valuable medical claims.

As of now, all the claims (made by either individuals or governing bodies) are not credible enough to believe in.

Question: Is there any official body that keeps a close eye on Kratom-related activities in the United States?

Answer: Yes, both FDA and DEA are pretty active and are monitoring everything associated with Kratom within the country.

Question: Is there any chance that Kratom gets completely banned or becomes legal for a lifetime?

Answer: If in the future, the federal government starts supporting research scientists and other relevant departments to perform human-based clinical trials and conduct solid research on Mitragyna, there may be a way out to understand the precise legal status of Speciosa.

Question: Is it safe to consume Korth with my regular medication?

Answer: Not at all. Try avoiding this as medical professionals and regular users don’t appreciate it. This tree leaf can react with other medications if you take them in parallel.