Coevolutionary Relationships: A Theory About Kratom And Human 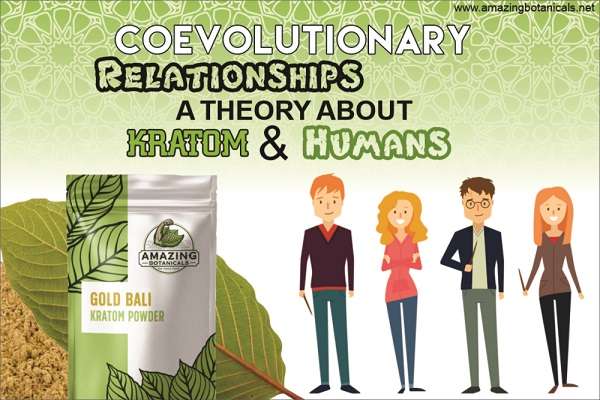 Two or more species coevolve in response to one another is known as the coevolutionary process. It’s more likely to happen when two species interact in the same environment. And, because we’ll be talking about ketum specifically, we’ll be considering coevolution mostly through the lens of plant species.

A Theory About Kratom And Human

A well-known example of plant coevolution is the relationship between blooming plants and pollinators. Over millions of years, bees and blooming plants, in particular, have coevolved. Bees receive food or nectar, whereas plant species benefit from pollen dispersal and the ability to remain stationary.

However, Coevolutionary partnerships are not necessarily beneficial to both sides. Coevolution can be shown in predator-prey interactions.

The following are examples of coevolutionary processes:

This begs whether people have contributed to the growth of plants such as the premium green Borneo plant, which is quite popular due to its numerous health benefits. Many people believe that, due to its herbal origins, it aids in improving performance in current-day activities and strenuous workouts.

We need to know how natural selection affects interacting species, including chosen pressures and geographic ranges, to discover if kratom and humans have a coevolutionary connection.

Pressures That Are Selective

Environmental forces that species respond to during the evolution process are known as selective pressures. Salty ocean air, harsh sunlight, arid landscapes, a lack of shade, and other selected pressures might exist in Southern California. Both biotic and abiotic selective pressures exist. The following are a few of the most typical selection pressures:

It is mostly grown in Southeast Asia. High humidity, high heat, increasing land clearance, harsh sunlight, storms, and other factors contribute to selective pressure. Ketum has learned to adapt in response to these selective forces, thus it flourishes in these conditions.

Humans can live in a variety of habitats, including freezing tundras, tropical rainforests, and high alpine sierras. However, such a wide range of living customs is limited to our own human cultures. In fact, it’s far more frequent for a species to be restricted to a small geographical area. This is referred to as the geographic range of a species.

Kratom’s geographic range is mostly limited to Indonesia, Thailand, Malaysia, Myanmar, and Papua New Guinea as a plant species. It would take a miracle of coevolutionary processes for it to spread outside this geographic range, and that’s where mankind comes in.

Is Human Activity Influencing The Coevolution of Kratom Plants?

Consider the kratom and human connection for a moment: The alkaloids produced by speciosa leaves provide benefits to humans when consumed; as a result, humans plant more trees, benefiting the ketum plant species!

Is this a coevolutionary relationship? Three conditions must be met for this to occur:

Furthermore, assume that new countries will develop kratom in response to the herb’s growing popularity. The plant species will be able to expand its geographic range beyond Southeast Asia in this situation, greatly enhancing its chances of survival. Plant dispersal is a typical human practice that involves moving a species to a new location that is different from the one where it was discovered.

Surprisingly, the further we distance ourselves from nature as a society, the more connected we feel to it. Fortunately, humans have successfully controlled a number of plants, allowing us to benefit from part of nature’s bounty even after years of environmental destruction. While marijuana has a long history of dynamic genes and coevolution with humans. The THC receptors in the brain are curiously specialized in their match with cannabis alone. Kratom has appeared to be less tuned toward assisting people in the past. Nonetheless, in terms of their immense significance and how they are viewed by culture and society, these plants have a parallel history.

From a Biological Evolutionary Perspective

To resist heterotrophic predators such as insects, vertebrate herbivores, fungus and microbes, plants, and other autotrophic organisms have created an astounding array of chemical defensive systems.

The relationship between live plants and the organisms that feed on them is one of antagonism as a result of a fierce and ongoing evolutionary arms race. Autotrophs provide fundamental minerals and energy to heterotrophs, the Earth’s surviving biota.

The coevolution of plants like kratom with humans is hypothetical. Unfortunately, little research has been done on human-plant coevolutionary processes and much less on ketum in general. However, such concerns must be asked as part of our ongoing investigation into the fascinating kratom tree and its alkaloids.

Consider cannabis as a final example of human-plant coevolution. In the 1960s, THC levels in cannabis varieties were less than 5%. On average, cannabis has a THC content of roughly 0.5 percent. Cannabis strains nowadays, on the other hand, frequently exceed 30% THC, probably due to increased human use.

It’s possible that the same thing is happening with kratom. If cannabis’ THC concentration increased by 29.5 percent in 60 years, kratom’s alkaloids can’t do the same? More research is needed to fully comprehend this occurrence in both kratom and cannabis.

Coevolution of plants and humans, on the other hand, is a crucial effort. Understanding how natural selection and elements like geographical spans affect our fauna and flora can help us promote respect for the natural world, avert climatic disasters, and increase the power of our natural kratom.