Censorship Of Kratom: Can I Discuss This Herb On Social Media? 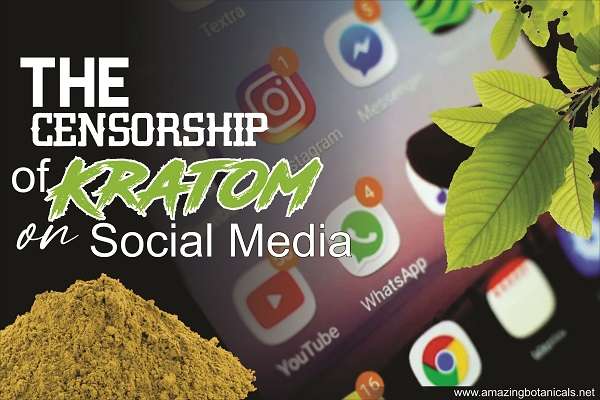 The censorship of Kratom on various digital platforms is a popular debate being carried out in many parts of the world these days. Social media channels, without a doubt, are superb platforms to spread awareness about any of your businesses.

The best part of these platforms is you can get connected to as many people as you want to make them familiar with your business. It is an efficient way to promote anything you want.

If you explore the online market, you will find thousands of brands promoting their visions on different social media channels including but not limited to Facebook and Instagram. Most of them have dedicated a significant budget for online paid campaigns. Facebook is one of the largest mediums being used to give businesses a solid boost.

Especially after the COVID-19 pandemic, a huge number of businesses have started following online business models. But, when it comes to Kratom businesses, the scenario is totally different.

Despite a wide range of influencer marketing campaigns, when you explore social media platforms, you will hardly find a few accounts or pages talking about Mitragyna and related products. It doesn’t really mean that the public is unaware of this plant. What else could be the reason?  Let’s try to find it out.

Why Is It Difficult To Find Kratom On Social Media Channels?

Due to very few to no human clinical trials and lack of research on Kratom, it is considered a controversial substance in many regions across the globe. It has, unfortunately, got some negative media attention in the past too.

Usually, large businesses own different social media platforms and they can restrict the content as per their requirements. As far as FDA is concerned, it closely monitors all the activities that businesses do in the online world.

FDA has issued a couple of warning letters to many Mitragyna companies in the past because of not following certain standards to ensure good quality.

Another fact is that the FDA has not yet approved Kratom; therefore, the giants on digital media have decided not to promote their businesses through these forums.

What Are The Reasons Behind Censorship Of Kratom On Social Media?

As it is clear that Kratom marketing is not allowed on digital media channels but it is more important to know about what precisely are the reasons behind these restrictions.

No one is allowed to suggest any specific dose of Kratom to consume on social media platforms because there is no medical evidence available in this regard. The reason behind this fact is a particular amount of Speciosa behaves differently with different people depending upon various factors including but not limited to age, physical fitness, and exercise.

This kind of restriction is not so good because there are a number of Kratom companies that can educate people regarding their suitable doses. In addition, for now, you can consult your doctor to get the exact idea about your suitable Korth dose.

Making false medical claims is strictly prohibited on social media platforms and it is one of the reasons behind the censorship of Kratom. If any company or an individual makes such claims, they may have to prove it with sound medical evidence followed by proper research. For those who are unable to prove their false medical claims made for marketing purposes, relevant authorities take strict actions against them.

Publishing medicinal benefits is another major reason behind the censorship of Kratom on social media channels. This domain is lacking these days in comparison to what it was in the past. In fact, without focusing on factual information, the Mitragyna businesses have started becoming more vocal.

If you get into the details, you will get to know that a number of Kratom companies have reported that their official accounts have been suspended and banned for many years and the process is still continuing. They claim that they are not even informed about the wrongdoing before shutting their accounts down.

Well, this is not the case only with Speciosa businesses, rather different advocacy platforms, Mitragyna news-groups, and other channels with discussion on Korth have also become the victim of censorship of Kratom. Apart from that, accounts of many users have also been banned because of posting Korth-related stuff.

It is so unfair for social media platforms to ban any page or account. I mean who has given social media channels the authority to decide what is appropriate and what not despite having millions of experienced users and educated companies.

If there was a restriction on Kratom marketing and selling such products on digital media platforms, this is pretty understandable. But, it is very unfortunate that the discussion platforms are also being banned in parallel and people can not even share their experiences with each other.

What Will Be The Future Of Kratom On Social Media Platforms?

The true Mitragyna enthusiasts are playing their part to support this herb to protect its future as much as they can. The American Kratom Association (AKA), without a doubt, is the biggest supporter of Korth around the world.

AKA is a trusted source to provide you with Speciosa related information, recommendations, regulations, and much more. If AKA starts gaining more popularity on social media platforms, a strong boost will be given to Mitragyna at the same time. It would be a great step against the censorship of Kratom.

Everyone has a different point of view regarding the censorship of Kratom on digital media channels. If you are in love with this herb, you must play your part to keep it alive.

The smallest thing you can do is to subscribe to all AKA social media accounts and pages to give this organization a solid boost because it has the potential to protect Kratom and to make its future pretty bright.

Censorship of Kratom on digital media platforms is a serious challenge being faced by a number of companies as well as individuals throughout the world. The Speciosa lovers don’t really appreciate this act. They claim that social media has no right to ban official Kratom-related accounts because a number of experienced consumers and reputed organizations communicate over there.

Question: How can Mitragyna advocates fight against the censorship of Kratom?

Answer: Well, the only thing they can do is to spread awareness about Speciosa related products among the community and tell them what precisely is the real influence of this herb. Once the community starts getting educated, it will be easy for Korth to survive on different social media channels.

Question: Why do DEA and FDA are against the use of Speciosa?

Answer: Basically, they are not against this herb but the reason why they have made a couple of attempts to criminalize Mitragyna is the safety of consumers. These are the official bodies that consider Korth an unsafe product to be taken by human beings regardless of their states, counties, or countries. Another reason behind this fact is that scientific studies have not yet approved the use of Mitragyna Speciosa.

Answer: The top digital platforms being utilized by a number of vendors include: Facebook, Instagram, and Twitter. Some sellers are using other platforms too to promote their products and services. But, there is always a risk that their account will get banned at any time if caught by the relevant authorities. They will be needing to start from scratch and it is seriously unfair for a vendor.