Kratom In Huntsville, AL: Legal Status & Where To Buy? 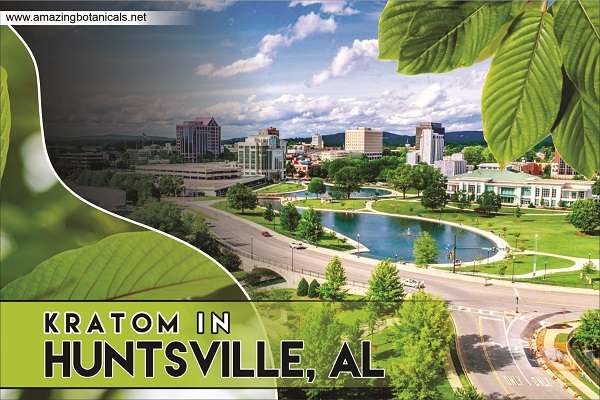 Kratom in Huntsville has become the most talked-about subject. The news of its criminalization is revolving everywhere around. The Kratom advocates are seriously worried about it because Kratom is a regular part of their daily routine.

They want to keep it alive at any cost. But, the question that arises here is: does Huntsville allow its community to consume Mitragyna variants? You will get an in-depth answer to this question later in this guide.

Huntsville is the largest city in a well-known state of the United States – Alabama (commonly termed AL). It is located in Madison County and is known for its state-of-the-art aerospace industry and the latest military technology.

The reason why thousands of overseas tourists visit this city is its natural beauty along with the exceptional tourist attractions including the “US Space and Rocket Center”. In addition, this city offers countless opportunities to study at the top-ranked universities and thousands of jobs open every now and then.

The students who come to this place for study purposes or the professionals who live here for their jobs usually ask about the availability of Kratom in Huntsville. If you are one such individual and are looking to get your favorite strains from a nearby shop, don’t do that until you read the discussion below.

Is It Legal To Use Kratom In Huntsville, Alabama?

No, you can’t use this herb legally over there. As far as the Kratom laws in the United States are concerned, the federal government has been very lenient for a while. Almost all states, except only 6, have declared Speciosa legal in the regions.

The FDA and DEA have made many attempts to criminalize this plant material and were able to convince a few states to take this step. The state of Alabama is one of them.

If you ask for a public opinion on this ban, you will not find anyone happy with that. Most of them are even trying their level best to somehow overturn this decision. It is not going to be a piece of cake for them but nothing is impossible as the industry is not regulated so far at the federal level. This is why the public is hopeful.

When Was Kratom Banned In Huntsville, AL?

The DEA – an American official body to keep a close eye on controlled substances – showed its intent to ban Kratom everywhere in the US in 2016. It tried to convince the policymakers around the country. But, amazing support from Kratom lovers launched a solid campaign against it and they didn’t allow this attempt to be a successful one. But, the great state of Alabama followed a different route.

In the same year, a bill was presented to the Senate to outlaw the two most important alkaloids of Kratom – mitragynine and 7-hydroxy-mitragynine. The Senate accepted this bill and made these alkaloids completely illegal to consume. As a result, Alabama was added to the list of states with a complete Speciosa ban.

Without providing any evidence, the bill stated that both of these alkaloids carry the properties of synthetic substances. It was indeed a wrong statement and the concerned authorities need to investigate it.

The lack of clinical trials and research were the two actual reasons behind adding Korth to the family of controlled substances. Two different petitions were signed (in 2016 and 2017) against this ban but both were unsuccessful.

Where To Buy Kratom In Huntsville, Alabama?

Now, you are well familiar with the fact that Kratom is an illegal herb and you can’t consume it anywhere as long as you are in Huntsville. People usually ask about whether or not they can buy it. So, the answer to this query is a big NO.

While exploring the local market, you will not find any head shop or smoke shop offering a range of Kratom products. They all are aware of the state laws and this is why they don’t keep Speciosa stock.

In case, you find a local vendor selling your favorite strains, buying them would be an illegal act and it won’t be a risk-free activity. It is better to avoid doing it. Otherwise, you will be exposed to the penalties listed in the below section.

Just like local sellers, you can’t order your Kratom online. No online vendor will deliver your parcel to Huntsville.

What Is The Penalty For Taking Kratom In Huntsville, AL?

No one is allowed to possess Kratom in Huntsville. If someone consumes it for personal use, it will be a Class C misdemeanor. The punishment would be a $15,000 fine and 10 years in jail. Of course, no one wants to intentionally get involved in these things but keeping a close eye on the latest laws must be our topmost priority.

The penalty is more severe for the people who get involved in repeated misconduct. If a person commits an offense twice or more, he or she will have to face 20 years of imprisonment and a $30,000 fine.

Do you want to expose yourself to these penalties? Of course not. Therefore, every time you consume Kratom, make sure that you have read through the latest laws.

The AKA’s Role To Support Kratom

The American Kratom Association is a single body operating in the country to keep Kratom alive. Along with running active campaigns, the AKA also accepts donations to give its cause a solid boost.

In addition, the Kratom Consumer Protection Act is the AKA’s solid document introduced to regulate the local industry. It is not only beneficial for the buyers but it also focuses on the betterment of sellers. If KCPA gets implemented in Huntsville or the whole of Alabama, you will be able to buy authentic strains regardless of the fact that you are a newbie or an experienced buyer.

As of now, five different states have successfully implemented KCPA in their regions. Oregon is expected to be the sixth one to adopt this act. In parallel, the AKA is participating in debates with the state officials and telling them about how beneficial it is to implement KCPA in Alabama including Huntsville and other major cities.

As mentioned in the above discussion, the residents of Huntsville are not happy with the Kratom ban and they are looking forward to somehow lifting it. They are supporting this botanical on both individual as well as collective levels. The AKA is also doing a wonderful job in this regard.

Everyone is hopeful and is trying to play their part to let lawmakers know about the importance of Kratom. Never take a step back from offering your sincere support to make Kratom legal once again in Huntsville.

Give It A Go

Thousands of people search online for the availability and legal status of Kratom in Huntsville, Alabama. Are you one of them and are concerned about purchasing this herb? It is very hard to say that Kratom is not a legal substance in Huntsville anymore. It is a clear indication that you won’t be able to buy it as long as you are within the premises of this city or the whole of Alabama.

Is there an alternate way to ingest Kratom in Huntsville, AL?

There is no way to consume Kratom goods if you are living or staying in this city. One thing you can do is to go to another state where laws allow you to take this botanical. As soon as you get there, you can order any strain you want and take it as and when needed.

An online seller is claiming to ship my products to this city. Should I give it a try?

Never trust a vendor who claims to deliver your products to Huntsville, AL. The reason behind this fact is that reputed online brands will never ship their products to the regions where Mitragyna is declared an illegal substance. So, if you find a merchant going against this policy, it is going to be a scam for sure. Always keep yourself away from it.

Is it possible to fly with Kratom in Huntsville, Alabama?

Flying with Speciosa to this city is an illegal activity that can put you in trouble as soon as you land over there. The airport security staff is well aware of the state laws and they don’t tolerate anyone disrespecting the regulations. So, never try to fly to or from Huntsville if you have Kratom in hand.